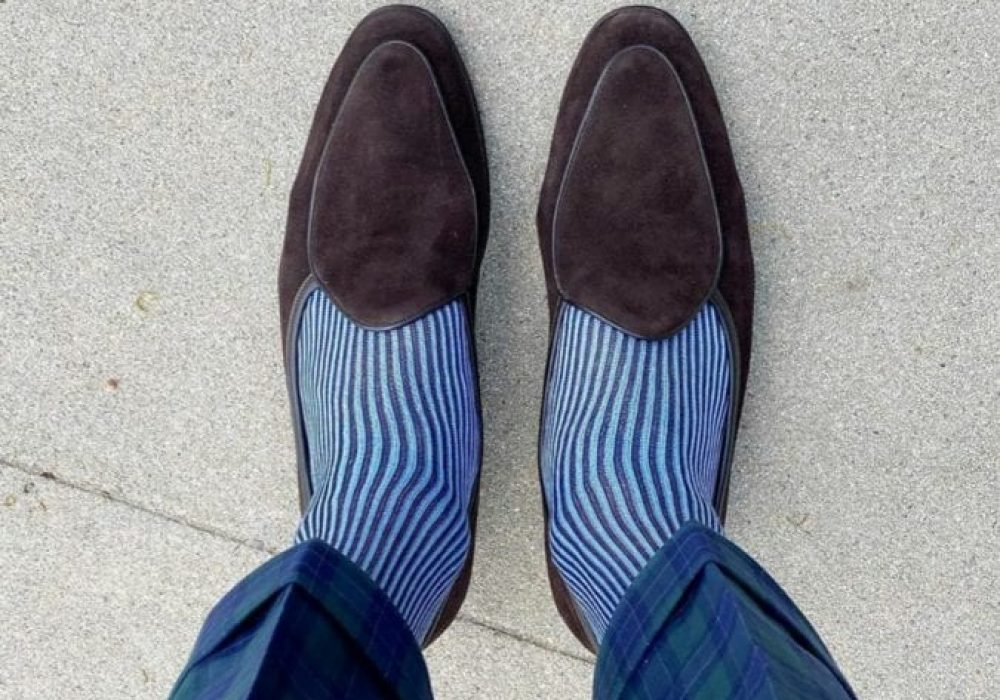 Coffee Near Me Fashion

The Deckchair sock by Bresciani, sold by Mes Chaussettes Rouges just might be my all-time favorite sock, especially for the Summer season. At least for the colorway that I own. When I got my pair, they only had this light blue/white combination (as shown below) and I immediately found myself attracted to it even though I only saw it as a ‘once in a while’ sock. But since owning it, I have worn it more than anything outside of a plain black or plain navy sock. Let me reiterate. From all of my patterned socks, I find myself wearing this one more than the rest. Which is surprising as it is bolder than most and as I get older, I get less bold so to speak (read: lazier).

I love my version but think that I love in more the blue on blue in the headline photo, which I realize I need to get a pair of asap. As well as the red version too. In fact, I just might petition to the owners of Mes Chaussettes Rouges that they need to expand their collection on this option, as I would like a version of the white combo with every color you can think of. While people might be put off by the white color in the sock, it actually really suits light-colored chinos and I would imagine that it would also very much pair well with light-colored linens. And well, the blue-on-blue version above, I could pretty much see myself wearing with any type of trouser there is. Its versatility does not seem restricted by any material, as you can clearly see.

This is not the 1st vertical stripe sock I have owned, on the contrary, I have so many in various styles and colors. But what I really like about this is the thread style of it as well as the width of the stripes, being quite narrow in fact, allowing for many stripes to be made. And funny enough I have always hated socks that had small horizontal stripes but really love this vertical stripe version. Imagine that!

Anyway, I really feel that this sock gives that touch of bold that we often look for but might shy away from. Its bold yet elegant nature really enhances the appearance of shoe/trouser combo and adds that little touch of style we all need every now and then when we feel like expressing ourselves. And if you agree, grab your pair at the link below! You can thank me later 😉