It’s a cold January morning at Vertex Coffee Roasters in Ann Arbor, Michigan. The glass-sided cafe a few steps from the University of Michigan’s campus is quietly humming with conversation and study. Glass jars and tins for coffee beans, reusable straws, and bamboo utensils line the retail shelves, while hand-written signs encourage customers to bring their own containers for a discount on drinks.

Vertex (pictured, right) is not yet 100 percent zero-waste—co-owner Kara Huckabone says its location and customer base makes it difficult to completely eliminate disposable cups—but it is one of a growing number of coffee companies across the US and beyond that are implementing more sustainable, less wasteful practices in a bid to reduce their carbon footprint.

The zero-waste cafe concept was thrust into the spotlight in December when Blue Bottle Coffee announced its goal to make all its US-based cafes zero-waste by the end of 2020. Blue Bottle is one of the most popular third-wave coffee companies (i.e. those marked by an emphasis on quality, traceability, and social responsibility) and one of the first to ignite consumers’ current interest in specialty coffee. While there’s no standard definition of zero-waste, Blue Bottle’s commitment entails the removal of single-use items such as cups, grab-and-go containers, and retail coffee bags. (It should be noted here that Blue Bottle is majority-owned by Nestlé, which a global audit found was the world’s second largest plastic polluter in 2019.)

It seems clear that, with such big companies beginning to get onboard, this trend will only gain steam. But is a zero-waste cafe truly possible—and could the drive to eliminate such items as plastic straws lead to the exclusion of people for whom disposables are vital?

The Rise of the Zero-Waste Cafe

Zero-waste cafes were all the rage a hundred years ago, back when they were simply called coffee shops. Such phenomena as paper cups and plastic utensils were less common, or yet to be invented. Customers had their coffee in ceramic cups, ate their pie from ceramic plates with metal utensils, and went on their way.

It was only in the latter decades of the 20th century, with the rise of on-the-go consumerism and the advent of Starbucks and other chain cafes, that plastic in the coffee industry really took over. Today, workers en route to the office think nothing of stopping to grab a quick latte, drinking it on their commute, and pitching the empty cup when they arrive.

The second half of the 20th century also brought the impending (now ongoing) climate crisis to the forefront of public consciousness. It’s become harder and harder to dismiss the science of a warming planet, and plastic’s role in polluting the ecosystem has become undeniable. Over the past decade, companies big and small have attempted to portray themselves as eco-friendly by broadcasting plastic-reduction goals and sustainability initiatives.

Some municipalities have even joined in, with Berkeley, California, voting to implement a 25 cent surcharge for disposable cups that started in January. Next up, an entire continent: Europe’s parliament announced a ban on all sorts of plastic disposables, beginning in 2021. The disposable cup, it seems, is headed for history’s trash pile.

The disposable cup, it seems, is headed for history’s trash pile.

But is a Zero-Waste Coffee Shop Even Possible?

Cafes looking toward zero-waste have plenty of issues to worry about, some more manageable than others. Coffee grounds can, at least, be composted relatively easily, and many cafes have moved to bulk sales of roasted coffee to cut down on the (incredibly tricky to recycle) retail bags. Paper towels can be replaced with cloth or electric dryers; milk can be supplied in glass rather than plastic bottles.

The aspect of zero-waste that coffee shops struggle most with is also the most ubiquitous: takeaway. Compostable cups and utensils are a popular alternative to the plastic-lined paper cup, but they suffer from many of plastic’s same life-cycle and disposal problems. (And if your city or state doesn’t have many receptacles for compostable waste, they’ll just sit in a landfill with the common garbage.)

One popular approach is to charge extra for disposable cups, so as to incentivize customers to bring their own reusable vessel in the future. Nossa Familia Coffee, a Portland-based roaster-retailer with three cafes around the city, implemented a small fee for takeaway cups as part of a company-wide zero waste strategy. “Our 25-cent charge on cups is not about trying to collect more money from our customers,” says Karen Lickteig, Nossa Familia’s sustainability director. “It’s about encouraging them to be more mindful of their choices around what kind of cup they use. We don’t profit from the upcharge; instead, we’ve set out to use the funds generated to offset the environmental footprint of our own and our customers’ behaviors.”

While businesses like Nossa Familia and Vertex are taking baby steps in order to familiarize and engage their customers without alienating them, others have jumped straight into the zero-waste deep end by fully eliminating all to-go items. Or in a few cases, they’ve simply started out zero-waste. For some, this has actually made things easier. Kate Pepler, who opened The Tare Shop in Halifax, Nova Scotia, in 2018, says being zero-waste from the get-go has taken the onus off of reeducating customers. “As I have never owned or worked in a coffee shop prior to this package-free one,” Pepler explains, “I was learning it all from scratch and wasn’t trying to change the way my staff or customers were doing things.”

In Aberdeen, Scotland, Foodstory Cafe (pictured, below) operates a completely zero-waste second location, Foodstory Zero, on the campus of Aberdeen University. As Jonny Chirnside, Foodstory’s HR/business development executive, explains, having like-minded partners and a sympathetic customer base is critical. “It was an easy enough thing for us to decide to do,” he says, “but we needed our suppliers and our customers to be up for the journey also. Asking people to bring KeepCups and their own takeout vessels as the only option was always going to be a bit of a challenge, but actually we found the university community incredibly quick to accept the idea.” 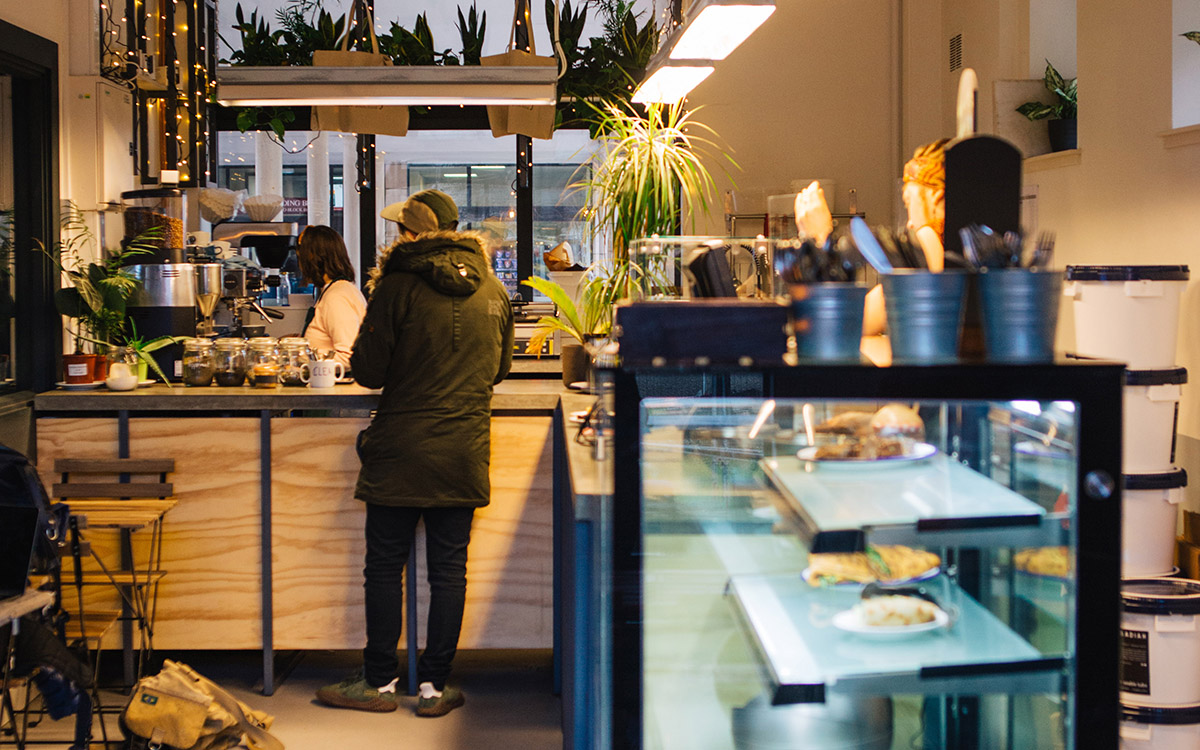 The Ableism of Zero-Waste

While cutting down on or eradicating disposable cups and utensils might be good for the planet, it can make life harder for some cafe patrons. Alice Wong is a San Francisco-based disabled activist and the founder of the Disability Visibility Project, and her love of coffee shops has come into conflict with the realities of the zero-waste trend. “Going to cafes gives me joy,” she says. “There’s something incredibly chill and inclusive about going to cafes compared to bars or restaurants that I find accessible.” But, she explains, “Cafes going zero-waste will create unnecessary hurdles for me and countless other disabled, older, chronically ill people who may have difficulty holding a heavy mug/glass jar, or unable to afford a deposit.”

For Wong, the all-or-nothing culture created by takeaway cup bans and zero-waste cafes is in and of itself harmful: “Shaming people and forcing them to ask for a paper cup or plastic straw by request is not equality or hospitality.” She’d prefer if customers could simply opt-in to reusable/biodegradable cups and straws, if it works for them.

“Straws and single-use cups are not the problem,” she continues. “Systemic and industrial plastic pollution is the problem. People who are serious about sustainability must include the most marginalized in their campaigns and policy development.”

Some coffee companies are attempting to do just that. In Portland, Karen Lickteig explains that Nossa Familia’s sustainability program was developed with the help of local social service organizations. “This has been a front-of-mind consideration,” she says. “We believe that with the right tools, sustainability and zero-waste is something that everyone can participate in.”

Whether this is indeed the case remains to be seen, but it’s obvious that the zero-waste coffee shop trend is only going to become more widespread. Creating an inclusive coffee shop culture while striving toward a more sustainable business model is an issue that the industry continues to grapple with. As with other aspects of the sustainability movement, involving all affected stakeholders in solutions and focusing on the structural and political power systems that are the overwhelming culprits of climate crisis will be key—rather than shaming people for needing a straw with their iced coffee.

Item added to your cart