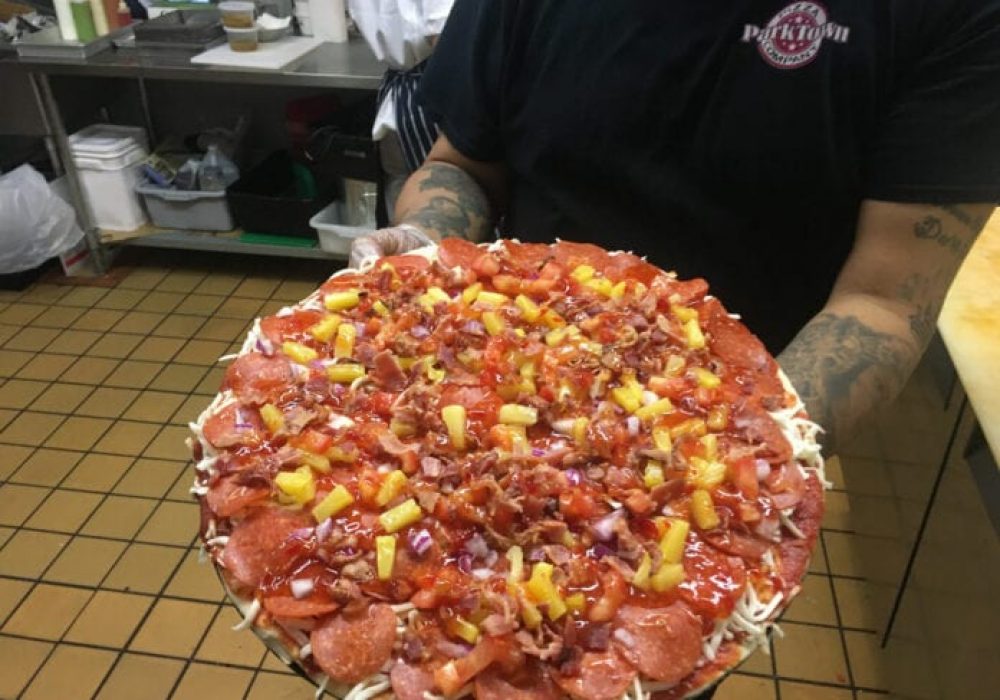 While restrictions on public gatherings and indoor activities in Santa Clara County continue to take a toll on local businesses, at least one Morgan Hill restaurant owner is hoping to beat the downturn on the strength of a loyal customer following, unique menu offerings and outdoor dining.

Parktown Pizza, located at 16375 Monterey Road, just began offering outdoor dining earlier this month—a few weeks after the county initially allowed such business and days after a series of miscommunications between state and county officials on what is actually allowed under Covid-19 restrictions. The pizza shop, owned by Nick Cheema, has been surviving on a steady stream of takeout orders and DoorDash pickups since the pandemic began.

Cheema opened Parktown Pizza in Morgan Hill in January 2018, when he and his two business partners were contacted by a real estate agent who said the previous business—also a pizza shop—was for sale. Cheema and his partners eagerly made the purchase and decided to expand to Morgan Hill. They had opened their original Parktown Pizza location in Milpitas about seven years ago, Cheema said.

“We remodeled the dining room, added TVs to give it that sports theme,” Cheema said. “And we wanted to do Indian style pizzas.”

Unique among Morgan Hill restaurant offerings, the Indian pizzas on Parktown’s menu—such as the Butter Chicken pizza or the Tandoori Paneer pie—are Cheema’s brainchild. He came up with the idea after trying every kind of pizza he could order on his various travels over the years. Indian pizzas, he said, are immensely popular in Canada and other regions, but he hasn’t seen much of the variety in the South Bay where he has lived since he moved to the U.S. from London in 1998.

“The unique taste of the Indian pizzas is from the different sauces and different marinades on each one,” he said. “The Indian chicken wings—a completely different flavor” than traditional bar style wings.

Parktown also has more traditional pizzas, with added flavors, on the menu—such as the Pepperoni Paradise and the Top Gun (a variation on the classic combination pizza).

Before the pandemic, Parktown Pizza was a popular venue for all kinds of parties, as the interior is set up to accommodate large crowds. Over a dozen televisions lining the walls would bring in sports fans year-round and at all times of the day, depending on the season.

With 50 beers on tap, the restaurant has been host to a following of regular customers of all kinds.

“We used to get a lot of people to watch the games, especially if the 49ers or the Raiders were playing,” Cheema said.

That following and Cheema’s commitment to customer service have earned Parktown Pizza some of the highest consistent ratings in Morgan Hill on the business review application Yelp. The restaurant has an average rating of four stars, and one evening just before the pandemic started, 50 of Yelp’s top reviewers dined out at Parktown to confirm the validity of the ratings, Cheema said.

“They tried all the different pizzas. For me, that was a huge success,” Cheema said.

Yelp reviewer “Mike C.” posted on the application about one month ago, “The pizza was amazing as always, and I took their recommendation and tried the curry sticks with bacon, absolutely amazing!”

Cheema added that after spending more than 15 years in the restaurant industry—starting out flipping burgers at fast-food chains—he has learned to prioritize customer service.

“We always ask customers for feedback—not everybody goes to Yelp,” Cheema said. “If we did anything wrong, we like to correct it on the spot.”

When the Covid-19 pandemic started, a huge chunk of Parktown Pizza’s business disappeared overnight. Birthday and graduation celebrations, little league parties and every major sporting event on the horizon were quickly canceled. He cut his Morgan Hill staff of 14 down to six employees.

Cheema and his partners were on the cusp of opening a third Parktown Pizza location in Willow Glen, but he said the county health department staff has been unable to visit the site due to restrictions on “non-essential activity.”

Earlier in July, Cheema and his staff began placing tables and chairs on the sidewalk outside the restaurant for outdoor dining, but space is limited due to ongoing social distancing requirements.

Luckily for Cheema and his staff, takeout and delivery orders have been steady throughout the pandemic. One evening last week, DoorDash drivers lined up at the start of dinner time to pick up orders that mask-wearing cooks were frantically preparing.

Cheema noted that the restaurant takes Covid-19 precautions seriously. Anyone entering the front door is asked to sanitize their hands. Staff constantly clean the dining tables and other surfaces that are touched often, Cheema said.

While he appreciates the ongoing business from all his customers, Cheema is eager for a return to pre-pandemic days.

“You can come here with your whole family. It’s a fun atmosphere,” he said.