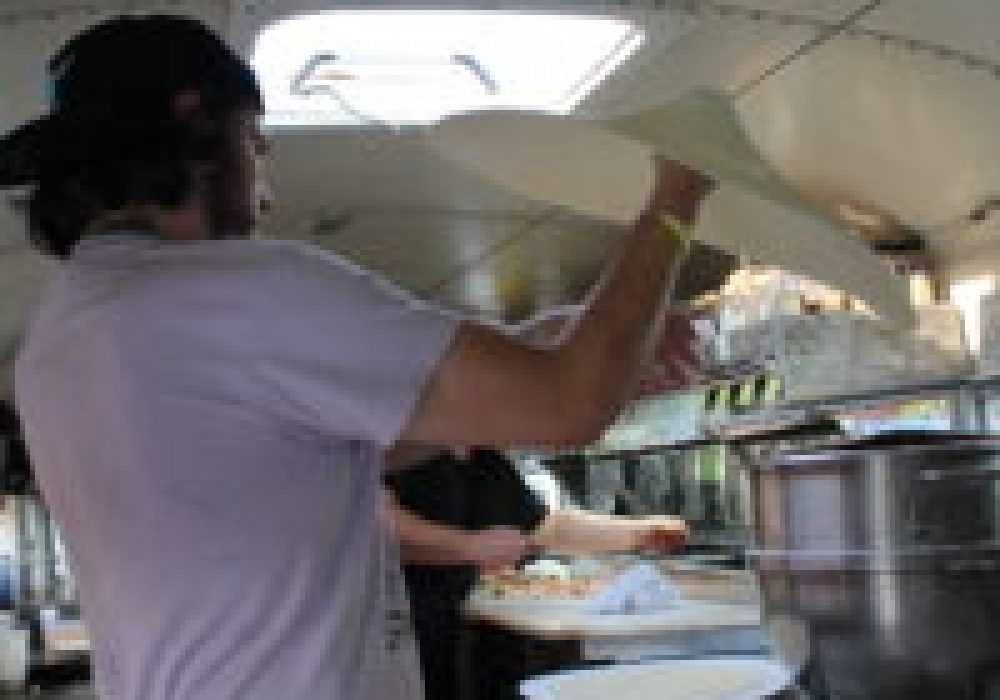 You may have seen a yellow school bus in the parking lot of Broast, on the corner of Walnut and Spring Streets. What you didn’t notice driving by is the hardworking pizza maker Dylon Neumann and his family who run the show.

The Pizza Machine began 18 years ago in a brick and mortar, three-story building in Illinois. Then it moved to Gallatin, and five years later, switched to the bus we see today, bedecked in the musings of strangers with sharpies.

The bus has a unique approach to making profit: no set prices.

“I explain that people should pay what they feel I deserve. I also say if anyone can’t afford to feed themselves or their families then they can come out here and eat for free, ’cause that’s what we are out here to do,” Neumann said.

So how does a business without prices stay afloat? By focusing on one day at a time. He explains that it is all in his fresh ingredients and the way he treats his customers.

“So it just depends on how well I am able to do my job. If I work hard and am able to impress the customer, and then they pay me enough to keep afloat… Up until now I have been able to do well enough that the community keeps it alive.” explained Neumann.

The Pizza Machine is an entire family affair. He remembers when his son Peace was first born, Neumann’s wife held the baby in a sling on her back, still making pizzas.

His older and younger brothers help out as well. Jerry Neumann, the older brother, can be spotted twirling dough through the air atop the bus in a video on The Pizza Machine’s Facebook page.

“My oldest brother Jerry competed in the United States pizza [throwing] team. He was a champion at doing all of that.” says Neumann, smiling.

Broast manager Andy Pitman said that Dylan Neumann reached out to the business about parking there so that he could give pizzas to those affected by the tornado in March.

“We’re happy to have him here. He’s a good guy who cares a lot about people and works hard to care for them in a really unique way. We highly value and care about each of our customers and try to be creative in the way that we do that in our business, so we find it valuable to be associated with someone like Dylan and worth it for us to offer any support that we can,” added Pitman.

Neumann makes his six hour, almost daily commute from his home in Gallatin, to the farmers in Nashville for fresh meat and produce, to the bus in Cookeville to begin his day.

The Pizza Machine is a bus aimed at supporting the whole community, from farmer to table, no matter what the customer can afford. They are open from 5 p.m. to midnight Friday through Sunday.