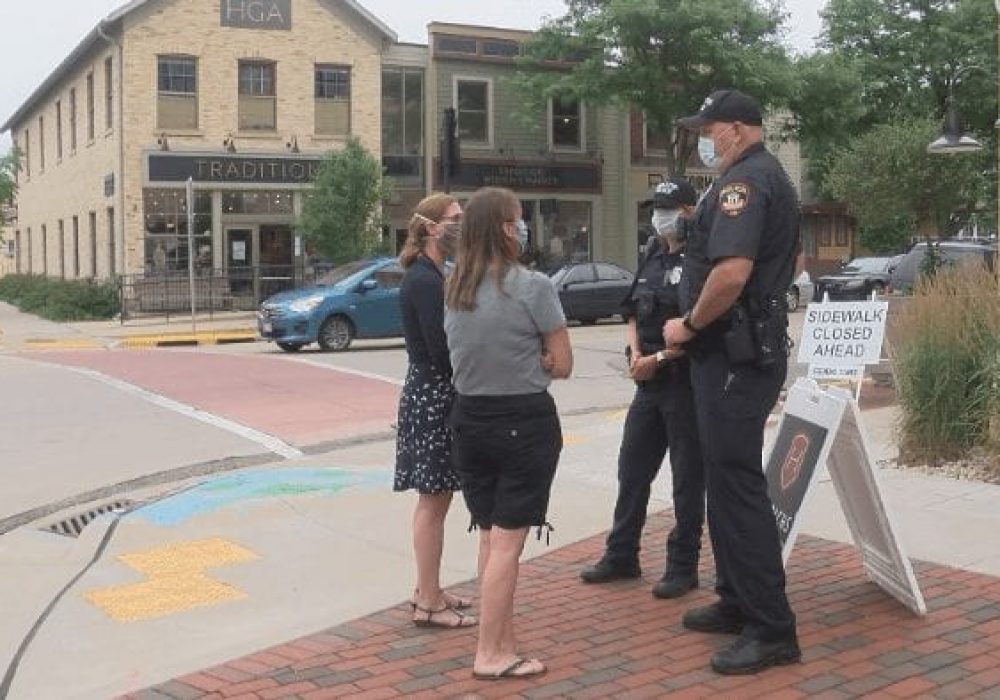 A viral social media post on Monday showed a sign in the window of Helbachs coffee shop stating, “This is a mask free zone. Please remove mask before entering.” The sign had been removed by Monday afternoon.

Photos of the sign quickly spread on social media Monday, with many people calling out the company, and a few others supporting the move.

On Wednesday, two protesters were outside of the shop with signs that read, “What would Jesus do? She would put a mask on,” and “Mask Up.”

Frieda Schowalter said she came to protest outside the business because of the experience she had at the coffee shop one day earlier.

“I came Tuesday and they still were not wearing masks,” Schowalter said. “The other things they were not following either, there was not distance between the tables.”

A 27 News reporter saw a number of customers going in and out of the coffee shop without masks, in apparent violation of the order.

Later, a supporter of the coffee shop came out to civilly debate the order with the protesters. Nicole Pulvermacher said she felt as though public health officials and pro-mask messengers were trying to bully her.

“Unless my spirit says it would be in your best interests to do this, or my heart felt like this feels right, this feels in alignment, then I would (wear a mask),” Pulvermacher said. “But it will not be because everyone else is telling me what to do.”

When asked if she considers acts like wearing a seat belt to be government orders followed by the masses, Pulvermacher said seat belt laws are not the same as mask orders.

Pulvermacher and Schowalter discussed the order’s merits for several minutes before both started getting agitated and Pulvermacher went back inside the business.

“I realize there’s freedoms but this is a global pandemic and personal freedoms do not trump taking care of one another,” Schowalter said.

Not long after that, a Public Health Madison and Dane County inspector and Madison Assistant City Attorney Marci Paulsen arrived. The two officials went inside the shop and left about five minutes later, saying their attempt to “educate” Helbachs owners about the order were unsuccessful.

“The owner was confrontational, said we were harassing him, actually called the police and said we are harassing him,” Paulsen said. “And said he would not follow any of the orders.”

Paulsen said public health officials will now move on to enforcement actions against the business. That begins with fines but Paulsen added more serious sanctions are now under consideration.

“When they refuse to accept education, refuse to comply with the orders, then we would be looking at issuing citations,” Paulsen said. “We will also be looking at whether the (food and drink) license will be affected and whether it will be suspended.”

PHMDC controls food and drink licenses in Dane County. Paulsen said the agency has the authority to suspend Helbachs’ license for as long as 14 days. If the problem persists, the agency can then move toward revoking the license altogether.

“We would have to start a revocation process through the board of health, which we may end up doing,” Paulsen said. “I don’t know at this point.”

Public Health Madison Dane County reports that out of 138 complaints pertaining to COVID-19 compliance they received on Monday, 126 were regarding masks. Monday was the first day of the mandate in Dane County.

While interviewing Schowalter, one of the co-owners handed her a copy of the PHMDC announcement of the emergency order. It highlighted the portion stating people should assume those not wearing masks have a valid reason for doing so.

On Monday, 27 News reached owner Melissa Helbach. Helbach had previously made headlines as one of the organizers of “Jesus Lunches,” in which the organizers invited public high school students to lunch at a public park and offered lessons in Christianity.