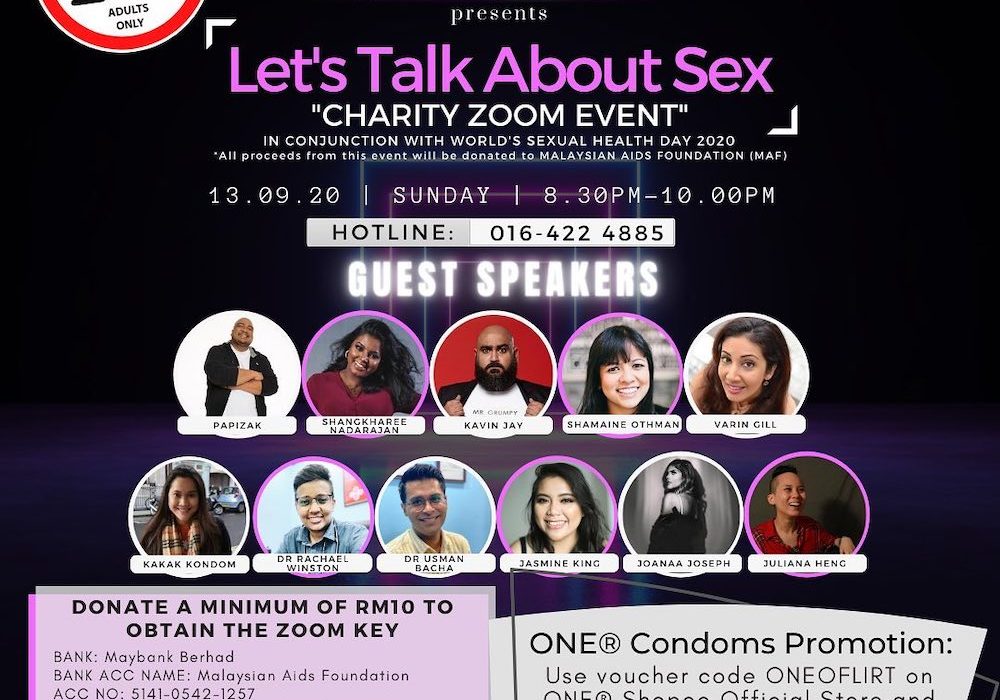 KUALA LUMPUR, Sept 9 — Everybody thinks about sex, but many are still ashamed to talk about it — even with their partner.

Despite sexual liberalisation over the past few decades, there still seems to be a dominant mentality that sex is something you do, and not talk about.

According to sexologist and sexual health practitioner Dr Rachael Winston, infidelity and lack of intimacy are two of the top five reasons for divorce among couples nowadays.

She added that the underlying issues are mostly linked to lack of open communication between partners.

And that’s where her role as a sexologist becomes paramount to keep the relationship together.

Simply put, Dr Winston said the role of a sexologist is to enhance intimacy between couples.

“A lot of people still don’t know that having a good sexual relationship with their partner can improve their mental, emotional and spiritual health,” she said.

She added that sexology and sexual health go hand in hand as one focuses on sexual acts while the other looks at the adverse effects of improper sexual acts.

“It’s not only about teaching someone how to have sex, but preparing them mentally and emotionally for a sexual relationship,” said Dr Winston, who is also MUC Healthcare centre medical director.

Based on her experience seeing many patients daily, Dr Winston said the main cause of sexual problems among couples is rooted to the way they were brought up and lack of sex education.

Fear of rejection or being labelled as a pervert, physical insecurities, and not performing well enough are among the common issues Dr Winston said she often hears from her patients.

To help re-start her patient’s sexual life, Dr Winston said she would usually have a separate counselling session with both partners to find out about their sexual problems.

Next, she would call the couples for another counselling session together to have an open conversation with each other.

According to her, the idea of having both of them together is to start the conversation and encourage them to communicate with each other about sex.

In most cases, Dr Winston said the lack of sexual communication between couples leads to a sense of emptiness, infidelity and even divorce.

“When we look closely we notice that the issue, for most of them, roots back to their peers, the family, the environment they were brought up as well as financial issues.

“A lot of these problems are tackled from an emotional point of view rather than physical.”

Dr Winston said she also gets patients who have performance problems or would want to try out certain sexual acts like rough sex but don’t know how to express their desire with their partner.

“That’s when I tell them that it’s all about being able to freely express your sexual thoughts with your partner.

“You are not going to find out if your partner is willing to satisfy your sexual desire if you don’t tell him/her about it,” she said.

How to start the conversation?

Dr Winston advised couples to have a conversation about sex each time after they had an intercourse session.

“When you have sex, if there is anything that you don’t like about your partner during the intercourse; it’s important to talk about it after the session.

“You don’t have to demoralise your partner.

“Just start by saying something positive and then talk about the part you didn’t like,” she said.

According to Dr Winston, the main reason most couples don’t talk about sex is the fear of being labelled as a pervert.

“Some people even view sex as a dirty and sinful act, which prevents them from talking about it.”

Having a conversation with your kids about sex may not be easy, but it’s a crucial lesson that should start at an early age.

Dr Winston said sex education should start from home, but she agreed that the stigma surrounding the topic has made it very challenging for many conservative families.

She finds it quite shocking to see some parents having no issues with their child watching a violent scene on TV but when it comes to a kissing scene, they ask the child to look away.

“Children will eventually find out [about sex] because at the end of the day they can access the internet anytime.”

Obviously, she added, the parents shouldn’t be too revealing to children when it comes to sex but as long as they have a simple conversation to address some of the questions that are going on in children’s mind.

“Despite just teaching them the anatomy of a penis and vagina, it is more important to teach kids why certain changes in their body happen as they grow up.

“But if you don’t educate them early, that’s when the complications happen after they become curious and start exploring it on their own.”

With easy access to the internet and social media, Dr Winston said the children are more prone to absorb misguided assumptions about sex if their questions are not answered properly.

As a result, she said lack of proper guidance could potentially lead to an adverse risk of unprotected sex — leaving them vulnerable to sexually transmitted infections and unwanted pregnancies.

“The schools, on the other hand, should educate the children about a good and bad touch.

“Children are influenced by so many things they see on TV, hence it’s very important for teachers to teach the children about inappropriate touching,” said Dr Winston.

She added that kids are so naïve and may not be able to differentiate an inappropriate touching until they reach a certain age and realise that they were being molested during their childhood.

To help break the stigma surrounding sex in the society, MUC Healthcare in partnership with ONE Condoms have initiated a virtual charity event called “Flirt”.

The event, titled “Let’s Talk About Sex”, will bring together a diverse line-up of guest speakers such as artists, key opinion leaders, doctors and social influencers to share their knowledge and take on various topics on September 13 from 8.30pm until 10pm.

The event is open to all adults aged 18 years and above where a minimum donation of RM10 is required to be channelled to Malaysian AIDS Foundation (MAF) for their ongoing initiatives.