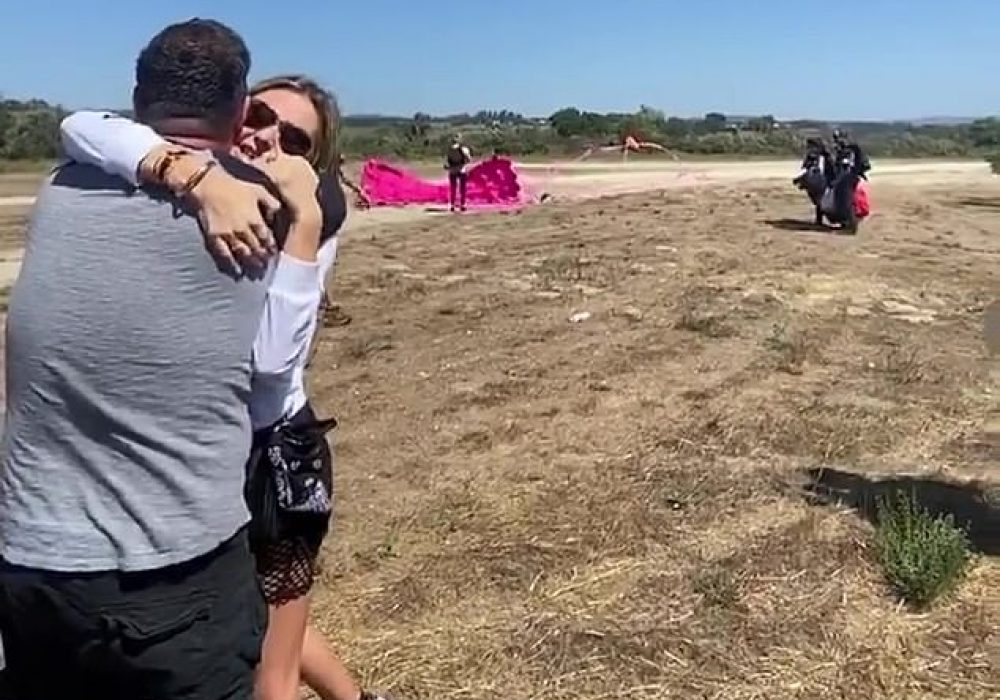 By Brian Marks For Dailymail.com

Lala Kent and Randall Emmett pulled out all the stops on Saturday to reveal the sex of their upcoming child.

The 30-year-old Vanderpump Rules Star and the 49-year-old film producer learned the news after hiring a skydiver to soar down with a colored parachute.

Lala and some of her reality TV pals were present to catch the skydiver coasting down with a pink parachute, revealing that they were having a girl. 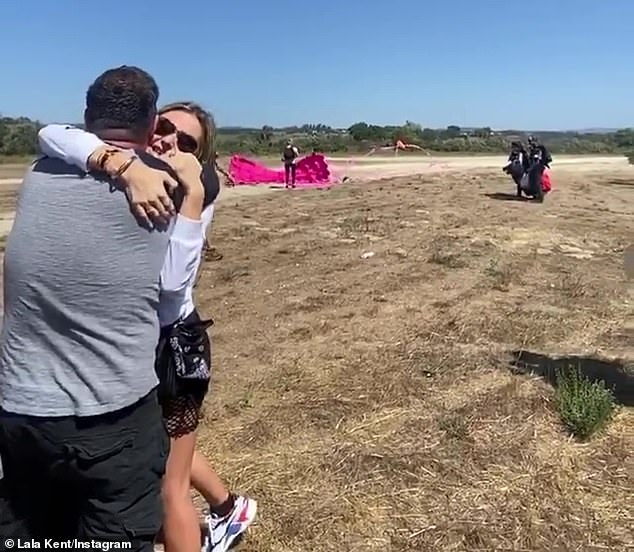 It’s a girl! Lala Kent, 30, and her fiancé Randall Emmett, 49, revealed they were expecting a baby girl after hiring a skydiver to land with a pink parachute on Saturday

Lala shared a short video of the diver’s descent to her Instagram account, captioning it: ‘We are having a baby Girl!’

‘Oh my God!’ she shouts and raises her hands as the pink parachute comes into view, just before the diver makes a smooth landing.

Randall rushes over from behind to give her a kiss before wrapping his arms around her in a loving hug.

The couple opted to skip the colored smoke and pyrotechnics that have become a popular part of sex reveal parties after one such event sparked the El Dorado wildfire near Los Angeles, which claimed the life of a firefighter on Thursday. 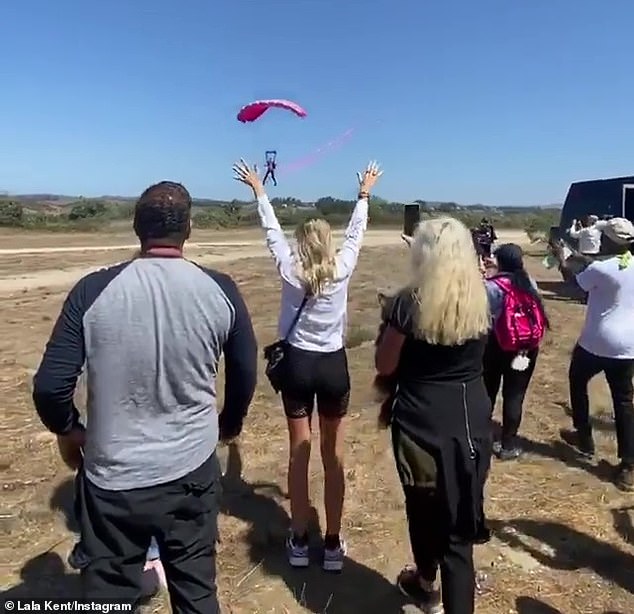 Surprise: Lala shared a short video of the diver’s descent to her Instagram account, captioning it: ‘We are having a baby Girl!’ 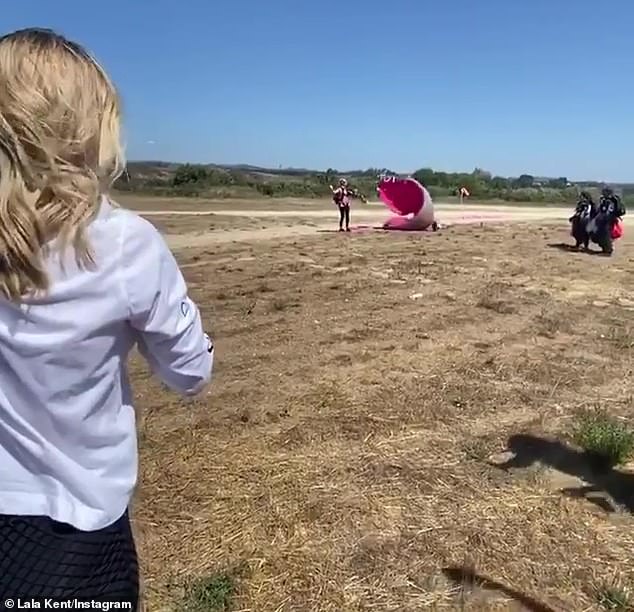 Sweet: Randall rushes over from behind to give her a kiss before wrapping his arms around her in a loving hug 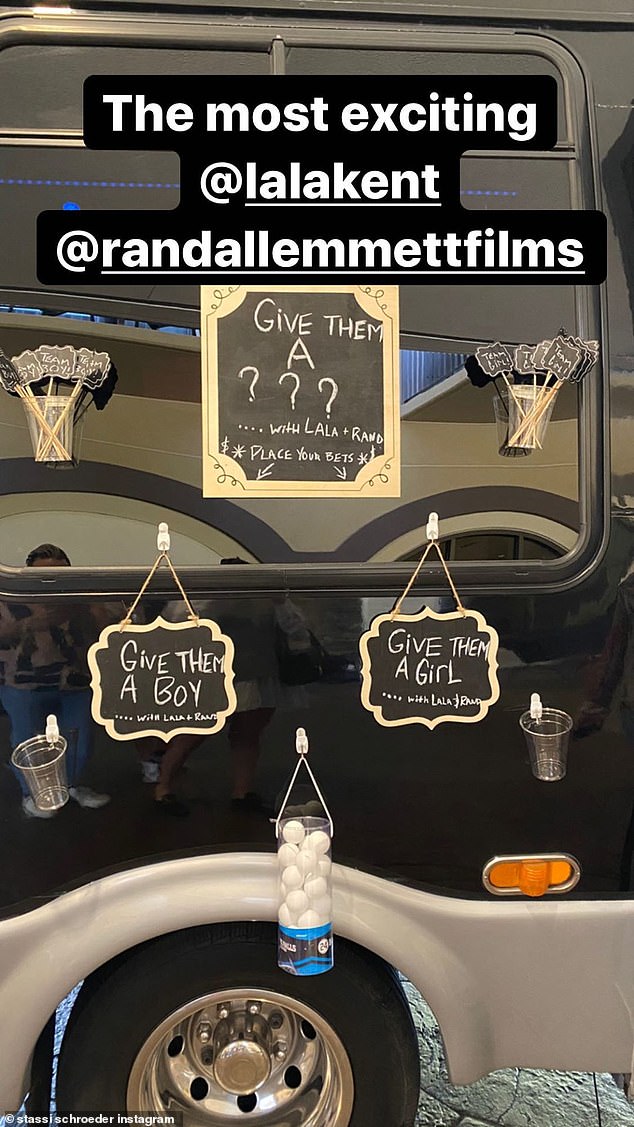 Guessing game: Her disgraced former costar Stassi Schroeder shared a photo of the bus that drove everyone, which had baskets for people to vote for a boy or a girl

Lala and Randall drove the party guests, including some of her Vanderpump Rules friends, out to the rural area to watch the skydiving.

Her disgraced former costar Stassi Schroeder shared a photo of the black bus that drove people to the site, which featured baskets attached to the side for guests to vote on whether they would be having a boy or a girl.

The former reality star, who was fired from Vanderpump Rules for racist statements and actions in the past, posted a short video of Lala as tears rolled down her cheeks.

‘We have little baby girls!’ Lala said to Stassi, who is also pregnant. ‘I hope they do better in life than us,’ she added.

Stassi’s fiancé Beau Clark was also present at the party, as was Tom Schwartz. 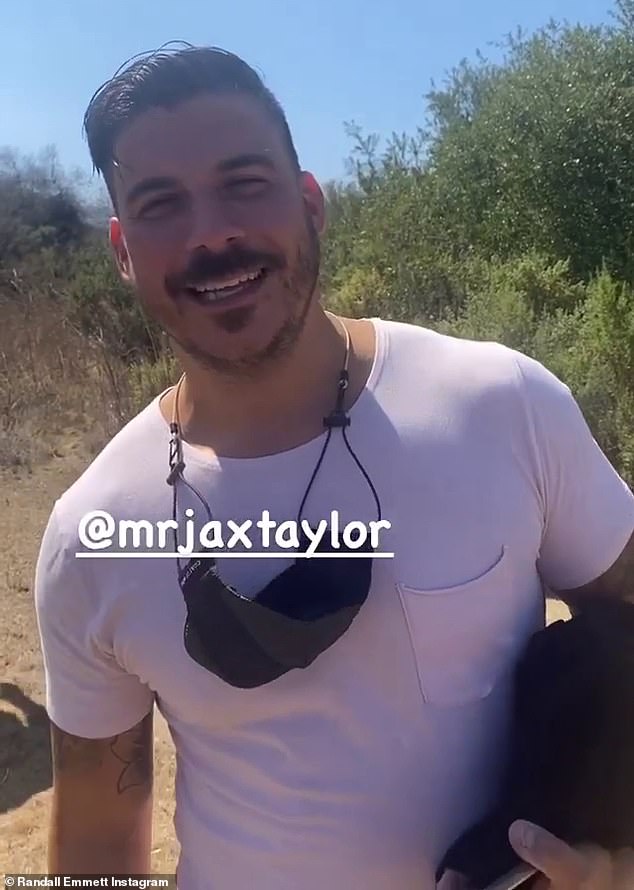 Correct guess: Lala’s costar Jax Taylor commiserated with Randall before the landing and said it was going to be a girl. ‘I just don’t think it’s in the cards for us to have boys,’ he joked

Before the skydiver arrived, Randall chatted with Lala’s costar Jax Taylor to find out what he was guessing.

‘I think, you know, we’re very similar kinds of guys, and I just don’t think it’s in the cards for us to have boys,’ said Jax, referencing Randall’s two daughters with his ex-wife Ambyr Childers.

‘I’m with you. I’m betting a girl!’ the Irishman producer concurred.

On Monday, Randall filmed Lala after she had gotten a call from her doctor informing her that the pregnancy was low risk and that she knew the baby’s sex, which the reality star told her to forward to her assistant, though she worried she wouldn’t be able to last five whole days without knowing. 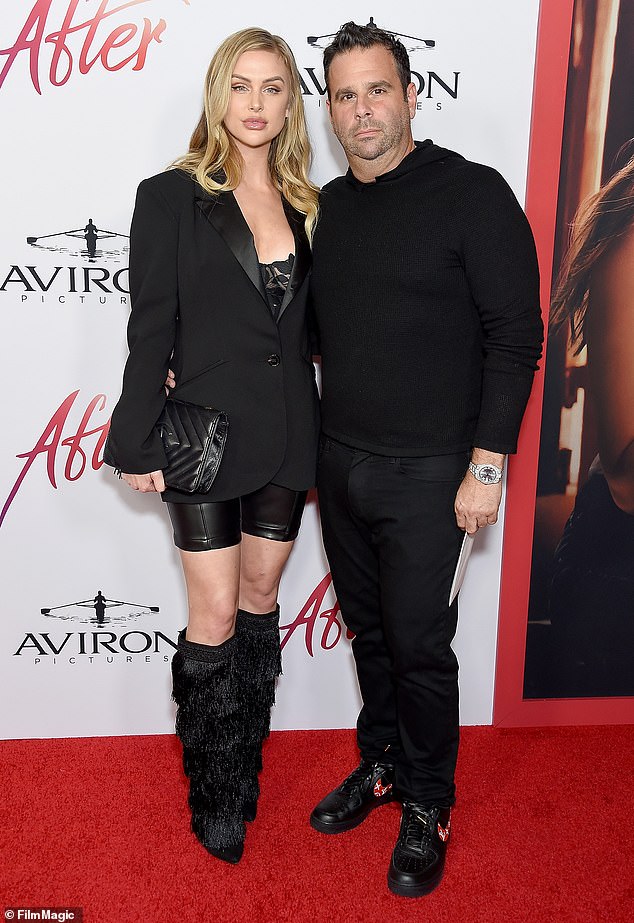 Cat’s out of the bag: Lala and Randall revealed they were expecting a child last month on their podcast with special guest Lisa Vanderpump; shown in April 2019

Lala and Randall revealed they were expecting their first child together last month on their podcast Give Them Lala … With Randall, featuring special guest Lisa Vanderpump.

‘Today is my 30 birthday and I can’t think of any other way to celebrate than with you guys coming through your headphones and speakers,’ she said. ‘I had the best gift given to me, my body also helped out too. I am pregnant!’

Lala said was hoping for a boy after living with Randall’s two girls.

‘We need more male energy in the house. There are a lot of girls wanting to play with Lala’s weave, her makeup. I need a boy. I need some trucks around,’ she joked.

The reality star and Randall announced their engagement back in September 2018.

The couple had to move back their wedding plans due to the coronavirus pandemic, but last month the film director revealed to Us Weekly that they had used the extra time to try to conceive a child.

Randall already shares 10-year-old London and six-year-old Rylee with his ex Ambyr Childers, who was most recently featured on the hit Netflix thriller series You. 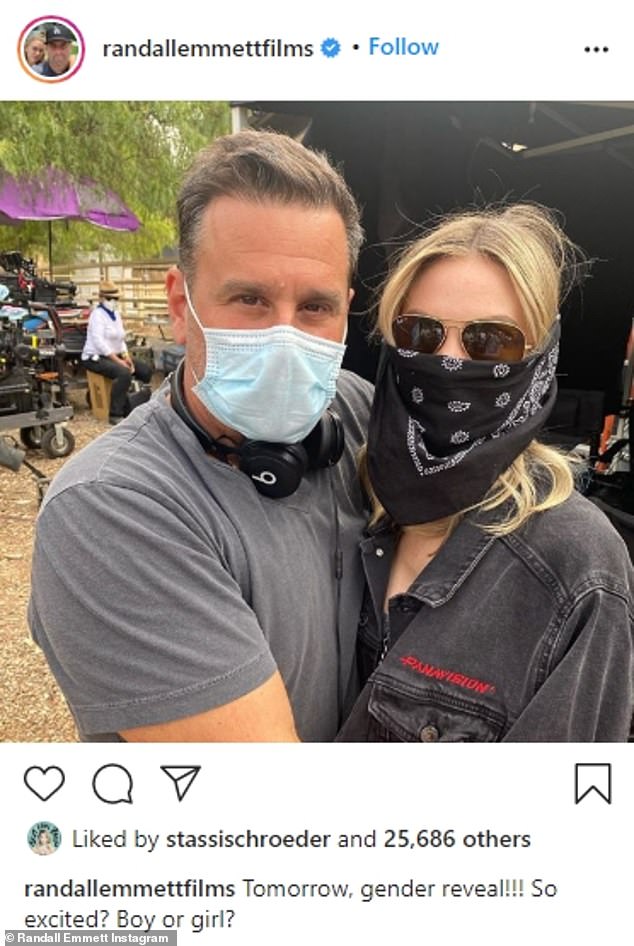