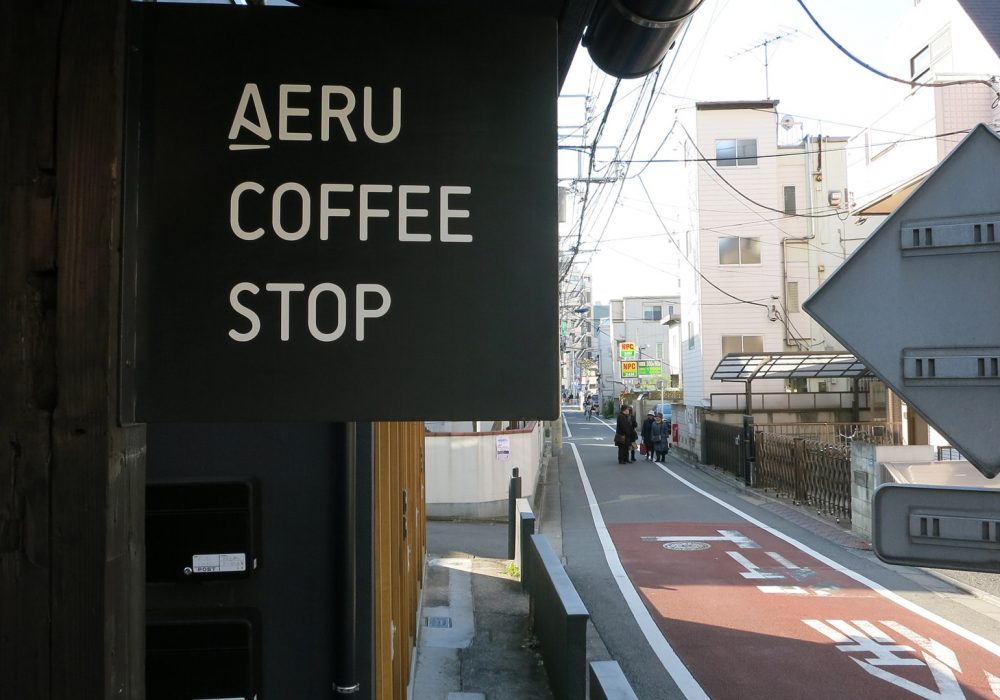 Editor’s Note: This feature was originally drafted before COVID-19 shutdowns spread across Japan, and includes an update on the café’s current state in the conclusion of this piece.

I came to Akabane-Iwabuchi this past winter because I wanted to get back into touch with specialty coffee on a neighborhood level. I’d heard about Aeru since it opened, and it seemed like a good example of what I was looking for. This is how I came to Akabane-Iwabuchi station, on the edges of Tokyo. The buildings were smaller, the pace of life a touch slower, and the cacophony of sounds from nearby Akabane were somewhere far-off in the distance. I walked down a quiet street lined with houses and small apartment blocks, to Aeru Coffee Stop.

Aeru is a small coffee shop built into a neat, modern black building. What’s surprising is that besides the bicycle shop next door, there isn’t much in the way of shops at all. It’s a suburb, filled with homes as far as you can see. The passersby are almost entirely local, save for the cyclists that zip by on rides into and out of the city. Owner Eito and Kayo Ogura say they didn’t choose the area intentionally, but that it had everything they were looking for when they started, and they’ve come to love it.

“It’s an easy place to live,” says Eito Ogura. “It’s a quiet neighborhood, and the location is just what we wanted. It’s not too far from the city, but it’s also close to the Arakawa River, so there’s natural scenery nearby, too.”

Inside, Aeru is warmed by the sizzle of French toast in the frying pan and the comforting aroma of freshly brewed coffee. I order a coffee and take a seat at the counter. As he brews, Eito tells me the coffee selection comes courtesy of 27 Roasters, located in Fujisawa. Eito is friends with the owner and enjoys the coffee selection.

Aeru Coffee Stop isn’t a large space, but it doesn’t feel cramped. Besides the counter seating, there are a few tables inside and a bench outside. The interior is a warm mix of white counters and clean wood. It’s easygoing and inviting.

The name Aeru comes from the Japanese verb “au” which, depending on how it is written, means to encounter, to meet, to gather, and to harmonize. The name reflects the couple’s desire to run a shop where people can do all of these things, whether it’s staging a person’s first encounter with specialty coffee, providing a place for friends to meet, or creating a warm space that exists in, well, harmony, with the neighborhood.

And from my seat at the counter, I feel like the name fits nicely. There’s a father on a walk with his two sons, a young man reading a book, and a couple on a brunch date. It seems like a nice blend of different people, but Eito Ogura tells me that the morning coffee culture in the neighborhood is just now starting to find its footing.

“At first, nobody came in the morning. We open at 7:00am because we want to be a morning coffee shop for people. But it took about a year for people to start coming in for morning coffee on the way to work, or after walking with their kids to school, that kind of thing.”

Surprisingly enough, the small Aeru coffee shop is a popular location for cyclists, many of whom often use the road Aeru is on for trips into and out of the city. These cyclists come in for coffee and breakfast, then head out on their way.

But it’s not just cyclists that visit from afar. Eito Ogura tells me that because the Akabane sports center is used by different athletes for track and field preparation, some international athletes have visited the shop on their search for quality coffee in the area. This includes the 2012 Olympic hurdles gold medalist, Sally Pierce, whose signature sits proudly on a shelf above the counter.

I talk with the Oguras in between bouts of coffee-making and breakfast preparation. They answer questions, toast sandwiches, and talk with locals while making lattes. From my spot at the counter, it feels like watching a neighborhood coffee culture take root. At the same time, though, I find it interesting that although coffee is core to the experience—it’s called a coffee stop, after all—it doesn’t feel like it is.

For people who know nothing about specialty coffee, the experience through which they encounter it is meaningful. If they enjoy that experience, they might decide to try it again. Watching Aeru makes you think a little of that feeling slowly embedding itself into the culture of the neighborhood. And it strikes me that if specialty coffee continues to grow here in Tokyo, it’s going to need two things; the big, popular Tokyo Coffee Festival type events to wow people with coffee’s potential and the local places that are comfortable to be around—where the coffee just happens to be excellent.

I got in touch with owner Eito recently because since writing this article, much in Tokyo has changed. I wanted to get his thoughts on the impact of COVID-19 as it related to Aeru and the surrounding neighborhood. He said that things have been tough but they’re doing their best. He said that since March, they went three months serving only takeout when businesses in Tokyo were operating at a minimum (if they weren’t closed entirely.) He also said that when the state of emergency was announced, the cafe was closed entirely.

But he also said that the increase in people working from home also meant that the cafe has been able to connect with people they otherwise wouldn’t, and they’re developing new regulars. But I think most importantly he said that he feels a stronger sense of value now in offline communication. “Life online has become standard because part of dealing with the pandemic is avoiding contact,” he said, “and this means sometimes we don’t talk to people outside of our direct family. But within that, the cafe stands as a small place where people can meet and talk, even when there’s distance between them. I think people feel the value in how coffee and food can create that connection, and I hope they’ll look for it more now that it has become more important.”

Hengtee Lim (@Hent03) is a freelance writer based in Tokyo. Read more Hengtee Lim on Sprudge.