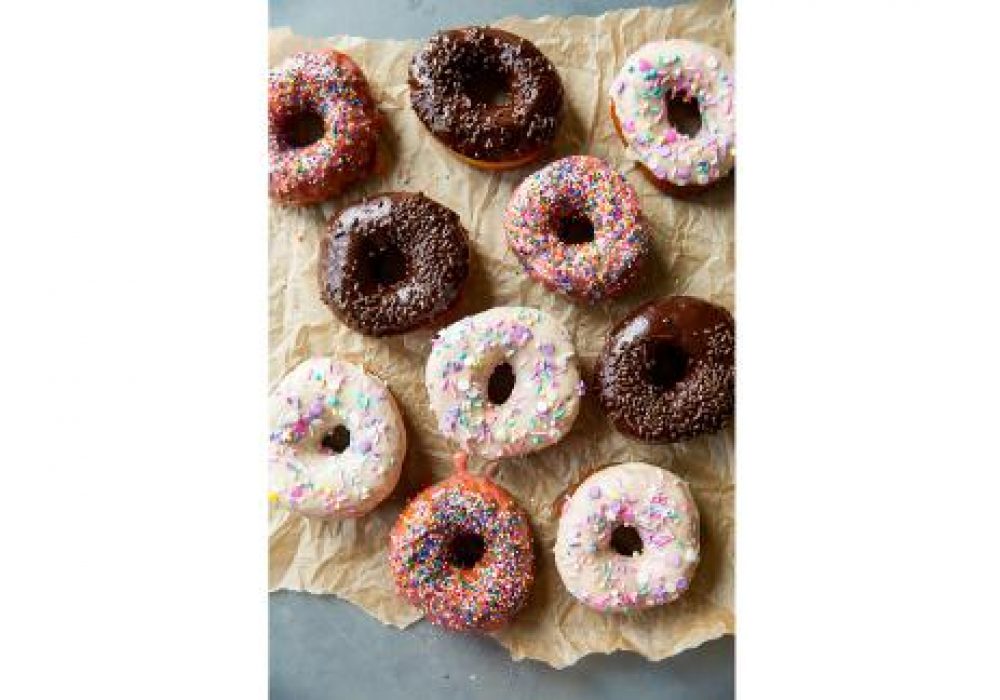 Homemade donuts may seem like a delicious dessert-for-breakfast dream that only the most talented pastry chefs and baking bloggers can pull off. The truth is, it’s fairly simple.

With many of us cooking from scratch a lot more than usual, donuts are a fun way to mix up a stale dessert or breakfast routine. And they’ll look fab on your Instagram. You can actually sling out a dozen donuts somewhere in the zone of one to two hours — most of which is waiting time. But what does it take to do it right? We wrangled a couple of experts to find out everything you need to know to make the best donuts at home.

How to make homemade donuts

What are the true secrets to flawlessly whipping up a batch of perfect donuts? We spoke with food blogger Sally McKenney of Sally’s Baking Addiction about making homemade yeast — aka fried — donuts. And we spoke with YouTuber and baked donut connoisseur Dzung Lewis of the Honeysuckle YouTube Channel to get her thoughts on how to bake the best homemade donuts.

McKenney says that it’s important to let the dough be sticky when you’re frying it up at home. Why? “The softer the dough the softer your donuts will be,” she says. McKenney adds that you should keep the fry time to about a minute on each side to get a nice golden brown, minus any weird burned flavor.

Lewis’ popular videos of baking uniquely flavored donuts like matcha, for example, look so perfectly yummy that we had to ask her how she does it. Well, she shares that buttermilk is her No. 1 secret ingredient in baked donuts because it “really helps to keep it moist and not dry.”

Now that we’ve gotten a few insider tips, let’s get into the recipes.

We can’t deny the deliciousness of a simple vanilla glazed donut. Some call them yeast donuts, while some call them fried donuts, but whatever you call them, these are the kind of glazed donuts found at classic donut shops just about everywhere. Prepare for them to melt in your mouth. Just add a perfect cup of coffee.

For the full instructions, visit sallysbakingaddiction.com.

Lewis pretty much exclusively bakes her donuts because “we try to stay on the healthy side and because when baking, it’s easier to swap out healthier ingredients, like using coconut or avocado oil instead of butter.”

1. Preheat the oven to 350 degrees Fahrenheit. Grease a donut pan with cooking spray and set aside.

2. In a large bowl, mix together the flour, sugar, baking soda and salt. Set aside.

3. In another bowl, mix the oil, milk, egg, vinegar and vanilla extract.

4. Combine the wet ingredients with the flour mixture using a rubber spatula just until combined. Pour the batter into a piping bag and pipe the batter into the donut pan until 3/4 of the way full. (The hole in the middle should not be covered.)

6. Remove from the oven and cool completely.

How to flavor and glaze your donuts

Now that we know how to make delicious donuts, how do we play with flavor combinations from here to mouthwatering eternity? It turns out there are three main ways to tinker with donut flavors — the dough, a glaze or a filling.

Flavor the dough: Donut flavor doesn’t have to be an afterthought or a last step before serving; flavor can go right into the dough. In fact, Lewis says, “I like the big donuts too because you can infuse real fruits into them. It’s like a better muffin!”

McKenney agrees that adding flavor to the dough is a great way to go. “I always like to add nutmeg because it kind of brings on this bakery flavor, but pumpkin pie spice or any other yummy spice mixes are also great in the dough,” she says.

Donut glaze ideas: Lewis says she likes a little bit of a glaze on her donuts. “To really make it a donut, it really needs a glaze on top,” she says. In fact, she adds that if she were to glaze a donut right now, “it would probably be a strawberry donut with a sweet lime and basil glaze, or I’d just do a vanilla bean glaze.”

McKenney also says she prefers a simple vanilla glaze. But when she’s feeling like mixing things up, she “adds lemon juice or maple to the glazes. Then, also add bacon for a maple bacon.” Other glaze ideas include chocolate ganache with sprinkles, or coconut-flavored glaze with shredded coconut.

1. In a bowl, stir together powdered sugar, cocoa powder and kosher salt. Add whole milk and vanilla, and mix until you get a thick glaze.

2. Dip the cooled donut into the chocolate glaze and set on an icing rack for any excess glaze to drip down. Add sprinkles while the glaze is still wet and let dry completely. Enjoy!

Donut filling ideas: Making a donut without a hole in the middle by using a single round cutter rather than an actual donut cutter means the door to the world of fillings opens. “After frying the donut, grab a piping bag and piping tip and go wild,” McKenney says. She suggests anything from pastry cream and lemon curd to jams or chocolate ganache — the chef’s imagination is the limit.

Tools for making donuts at home

According to McKenney, when cooking your donuts, use “a large heavy-duty pot because oil gets really, really hot. You don’t want to use a cheap pot for this. I use an enameled cast-iron Dutch oven. It doesn’t need to be cast iron, but I love mine because it’s so multipurpose.”

If a Le Creuset Dutch oven is out of your price range, check out this one from AmazonBasics, which you can get for under $50. McKenney also has a tip: “Let your donuts fry evenly by not overcrowding the pot — two or three at a time, max.”

“You have to have an oil thermometer to check the temp of the oil,” says McKenney, because if it’s not hot enough, the donuts won’t really fry. She adds to look for around 375 degrees Fahrenheit. This oil and candy thermometer gives an instant read and takes up significantly less space than an old-fashioned version.

It goes without saying that in order to make donuts, a donut cutter will be essential. But this one is especially cool because it can cut your typical donut with the hole in the middle or cut a donut without a hole so that you can pipe in delicious fillings — Boston cream, anyone?

Of course, McKenney adds that “any round cookie cutter that’s 3 to 4 inches will work as a donut cutter if you want to fill your donuts.”

For baking donuts, Lewis advises using a silicone donut pan. “Having baked a lot of donuts, I recommend the silicone pans because they come out cleaner,” she says. “The nonstick ones, after a few uses, stick no matter what.” She also advises to put the molds on a baking sheet before they go into the oven, for stability.

One thing Lewis emphasizes is that the donut molds are really the only special equipment you need to make baked donuts. “They’re so simple — you just need a bowl, a spoon and a spatula,” she says.

This set checks all of our checkboxes for a happy chef: nonslip bottoms, high walls for reduced splatter, pour spouts and easy-grip handles. The smaller bowl will also come in handy for mixing up and dipping donuts in glazes.

A good mixing spoon will last a lifetime and can handle all sorts of jobs in the kitchen. This one is a safe bet. As one 5-star reviewer puts it, “In my 50+ years of home cooking, I’ve tried glass, plastic, ceramic and metal. This beechwood is far superior. Welcome back to the good old days!”

No matter what dessert is being whipped up to bake in the oven, chances are spatulas are needed. Donuts are no exception. These spatulas can withstand up to 450 degrees Fahrenheit, they can be tossed in the dishwasher and they have a nonstick easy-grip surface throughout.

For filling those baked donut molds, Lewis says to grab “a piping bag or ziplock bag with the tip cut off to cleanly pipe it into the mold. … It can get messy otherwise.” This piping set comes with reusable silicone piping bags and (among many others) a tip that’s just for piping in that Boston cream filling.