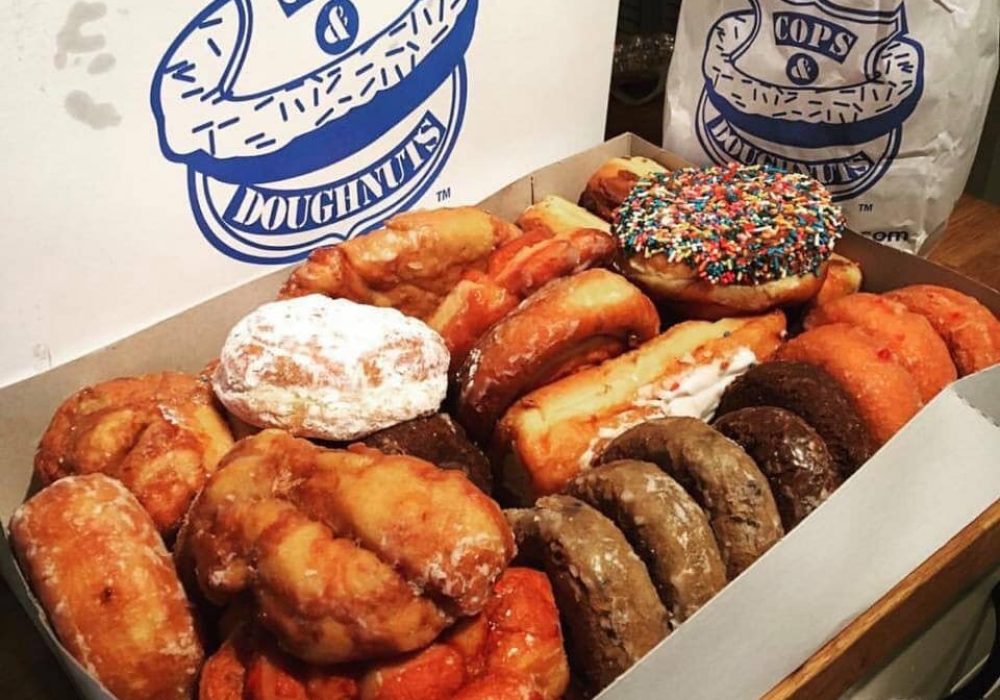 How nine protectors of the law became purveyors of the bear claw.

There’s a cop shop in Gaylord where the phrase “D.W.I.” has nothing to do with adult beverages or erratic driving.

Try “Don’t Glaze Me, Bro.” or “Cereal Killer” or “You Have the Right to Remain Glazed.”

Lots of thin-blue-line silliness here. But folks don’t stop in for the cop shop corny swag, they come for the goods — the baked goods.

“We offer a full line of great pastries,” said Alan White, one of the nine active and retired Clare police officers who own the bakery.

White, a big guy who’s gone by the nickname “Bubba” all his life, is one of the owners. He and Greg “Ryno” Rynearson are retired from law enforcement and run the day-to-day bakery operation.

The other seven owners — all of whom have nicknames, too — are still on patrol as officers, but they help out in the bakery on occasion. (One of is City of Clare Chief of Police Brian Gregory.)

CUFF ’EM
Some of the bakery’s most popular creations include the sweet-and-salty Bacon Squealer, an elongated maple-glazed doughnut with two bacon strips. Other popular choices include the Fleeing Felon Fritter (an apple creation that is big, cinnamon-y, and moist) and the custard-filled, chocolate-frosted Bismarck.

An assortment of breads are baked daily, including Italian, cinnamon-raisin, pumpernickel rye, cheddar cheese, and more. “We have a fifth-generation breadmaker overseeing things,” said White.

All products are handmade at the main bakery in downtown Clare and delivered by truck no later than 5am each day to the Cops & Doughnuts Gaylord location — aka, the “Jay’s Precinct” shop, at 1151 South Otsego Ave., which is connected to the Jay’s Sporting Goods store.

RAP SHEET
The backstory to this bustling business begins in 2009 when Clare’s historic bakery — Clare City Bakery — was within weeks of closing.

“You gotta remember, Clare’s a town of some 3,000 people,” said White. “We only had nine officers on the whole police force. So five of us were eating lunch one day, and we heard the bakery was gonna close. We were scared for our little town. We talked about it and said, ‘Hey, what if we bought it?’”

All nine officers stepped up and invested $1,500 each as a down payment to keep the historic bakery humming. ‘

Nine protectors of the law became purveyors of the bear claw. The pairing of police and pastries was too ironic for them — or the media — to overlook.

“Our plan was, if it breaks even, we’ll be happy,” said White. “We thought we’d run it for a few years, then sell it. But the media got hold of it, and it just took off.”

NBC Nightly News, Fox News, MSNBC, and Good Morning, America each did features on the police-pastry sensation. Cops & Doughnuts also has been featured in several publications, including Kiplinger’s Personal Finance magazine, the 2011 book “Locavesting,” and the online cooking and culture site, AmericanProfile.com.

In 2013, Saveur magazine even named Cops & Doughnuts — then only one location, in Clare — one of the finest doughnut shops in the nation and their “NightStick” (a triple-chocolate Long John) as one of the best doughnuts in the world.

The following year, Doughnut Showdown, a popular television show on the Food Channel, picked Cops & Doughnuts’ “Driftwood Doughnut” (a Long John filled with coconut cream and topped with chocolate ganache and toasted coconut) as a contest winner, netting the bakers a $10,000 top prize.

Prompted by the good buzz in Gaylord, the guys opened two more “precincts” — one in Bay City in 2016 and another in Mt. Pleasant in 2017. When all the shops are running at capacity, they employ almost 50 workers.

When the COVID-19 virus began spreading earlier this year, the Clare bakery stayed open, but the Gaylord operation closed temporarily. Business fell off about 85 percent compared to last year, according to White.

“When it started, we were the only place in Clare that had bread,” said White. “We were deemed essential because we could make bread.”

The Gaylord shop reopened in May and is seeing steady traffic again.

“People are getting out now,” he said. “We’re gonna bounce back.”