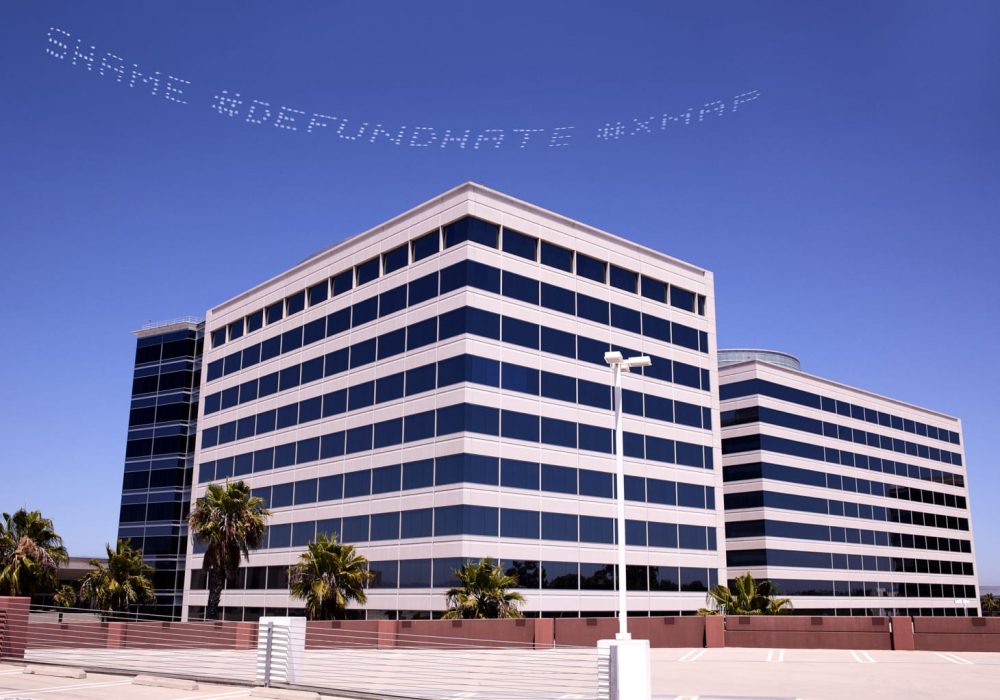 From Los Angeles to El Paso, New York City to New Mexico, messages denouncing the immigrant detention crisis and incarceration culture graced the skies this July 4 weekend. Those who looked up on Friday and Saturday may have encountered phrases such as “Stop Crimmigration Now,” “#DefundHate,” and other urgent calls to action and expressions of hope in both English and Spanish.

Organized by visual and performing artists Cassils and rafa esparza, In Plain Sight (IPS) enlisted skytyping plane fleets to spell out the texts in water vapor over 80 detention facilities, immigration courts, borders, former internment camps, and other notable sites. Each message was written by one of 80 participating artists and activists and ended with the hashtag #XMAP, leading viewers to the project’s website: a vast resource center including an interactive map that locates detention facilities in your vicinity; essential data and statistics on the migrant detention emergency; and a list of border funds and organizations in need of donations and volunteers.

The poignant yet fleeting messages hovering amid the clouds may be more symbolic than actionable, but the initiative is backed by a commitment to support efforts that serve the immigrant community. Its website offers a directory of engaged organizations, including La Resistencia; the Haitian Bridge Alliance; Raices; the ACLU Southern California; and numerous others. Social justice documentarian PJ Raval and producer Farihah Zaman will produce an episodic series on the project focused on issues of migration, identity, and belonging, highlighting the experiences of activists and artists who are first-generation immigrants or undocumented.

IPS also bring to light some sobering and disturbing statistics. As of July 2020, there were more than 200 Immigration and Customs Enforcement (ICE) detention centers in the US. Over 5,400 children have been separated from their families at the Mexico border between July 2017 and October 2019, and more than 25,000 people remain incarcerated in ICE detention centers to this day.

In order to offset the carbon footprint of the planes involved in the project, artist Sam van Aken will plant saplings of his “Tree of 40 Fruit” nearby detention facilities and incarceration sites — a type of fruit tree that yields 40 types of stone fruit, ripening sequentially from July to October. IPS estimates that each half hour of skywriting can be offset by planting five trees.