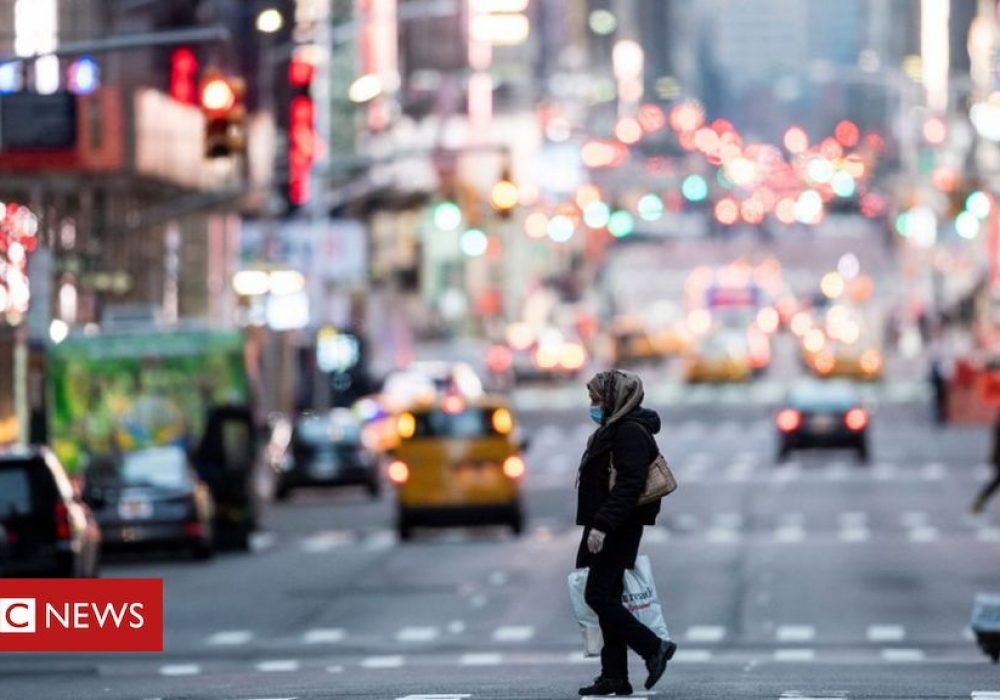 Levels of air pollutants and warming gases over some cities and regions are showing significant drops as coronavirus impacts work and travel.

Researchers in New York told the BBC their early results showed carbon monoxide mainly from cars had been reduced by nearly 50% compared with last year.

Emissions of the planet-heating gas CO2 have also fallen sharply.

But there are warnings levels could rise rapidly after the pandemic.

With global economic activity ramping down as a result of the coronavirus pandemic, it is hardly surprising that emissions of a variety of gases related to energy and transport would be reduced.

Scientists say that by May, when CO2 emissions are at their peak thanks to the decomposition of leaves, the levels recorded might be the lowest since the financial crisis over a decade ago.

While it is early days, data collected in New York this week suggests that instructions to curb unnecessary travel are having a significant impact.

Traffic levels in the city were estimated to be down 35% compared with a year ago. Emissions of carbon monoxide, mainly due to cars and trucks, have fallen by around 50% for a couple of days this week according to researchers at Columbia University.

They have also found that there was a 5-10% drop in CO2 over New York and a solid drop in methane as well.

“New York has had exceptionally high carbon monoxide numbers for the last year and a half,” said Prof Róisín Commane, from Columbia University, who carried out the New York air monitoring work.

“And this is the cleanest I have ever seen it. It’s is less than half of what we normally see in March.”

Although there are a number of caveats to these findings, they echo the environmental impacts connected to the virus outbreaks in China and in Italy.

An analysis carried out for the climate website Carbon Brief suggested there had been a 25% drop in energy use and emissions in China over a two week period. This is likely to lead to an overall fall of about 1% in China’s carbon emissions this year, experts believe.

Both China and Northern Italy have also recorded significant falls in nitrogen dioxide, which is related to reduced car journeys and industrial activity. The gas is a serious air pollutant and also indirectly contributes to the warming of the planet.

With aviation grinding to a halt and millions of people working from home, a range of emissions across many countries are likely following the same downward path.

While people working from home will likely increase the use of home heating and electricity, the curbing of commuting and the general slowdown in economies will likely have an impact on overall emissions.

“I expect we will have the smallest increase in May to May peak CO2 that we’ve had in the northern hemisphere since 2009, or even before,” said Prof Commane.

This view is echoed by others in the field, who believe that the shutdown will impact CO2 levels for the whole of this year.

“It will depend on how long the pandemic lasts, and how widespread the slowdown is in the economy particularly in the US. But most likely I think we will see something in the global emissions this year,” said Prof Corinne Le Quéré from the University of East Anglia.

“If it lasts another three of four months, certainly we could see some reduction.”

What’s likely to make a major difference to the scale of carbon emissions and air pollution is how governments decide to re-stimulate their economies once the pandemic eases.

Back in the 2008-09, after the global financial crash, carbon emissions shot up by 5% as a result of stimulus spending that boosted fossil fuel use.

In the coming months, governments will have a chance to alter that outcome. They could insist, for instance, that any bailout of airlines would be tied to far more stringent reductions in aviation emissions.

“Governments now have to be really cautious on how they re-stimulate their economies, mindful of not locking in fossil fuels again,” said Prof Le Quéré.

“They should focus those things that are ready to go that would lower emissions, like renovating buildings, putting in heat pumps and electric chargers. These are not complicated and can be done straight away, they are just waiting for financial incentives.”

However, some argue that if the pandemic goes on a long time, any stimulus would more likely focus on promoting any economic growth regardless of the impact on the environment.

“I certainly think climate could go on the back burner, and in this case, I don’t think there is much hope that stimulus goes to clean energy,” said Prof Glen Peters from the Centre for International Climate Research.

“Any stimulus will help those with job losses such as tourism and services. I think this is very different to the global financial crisis. The only silver linings could be to learning new practices to work remotely, and buying a few years of lower growth allowing solar and wind to catch up a bit, though, these may be rather small silver linings.”