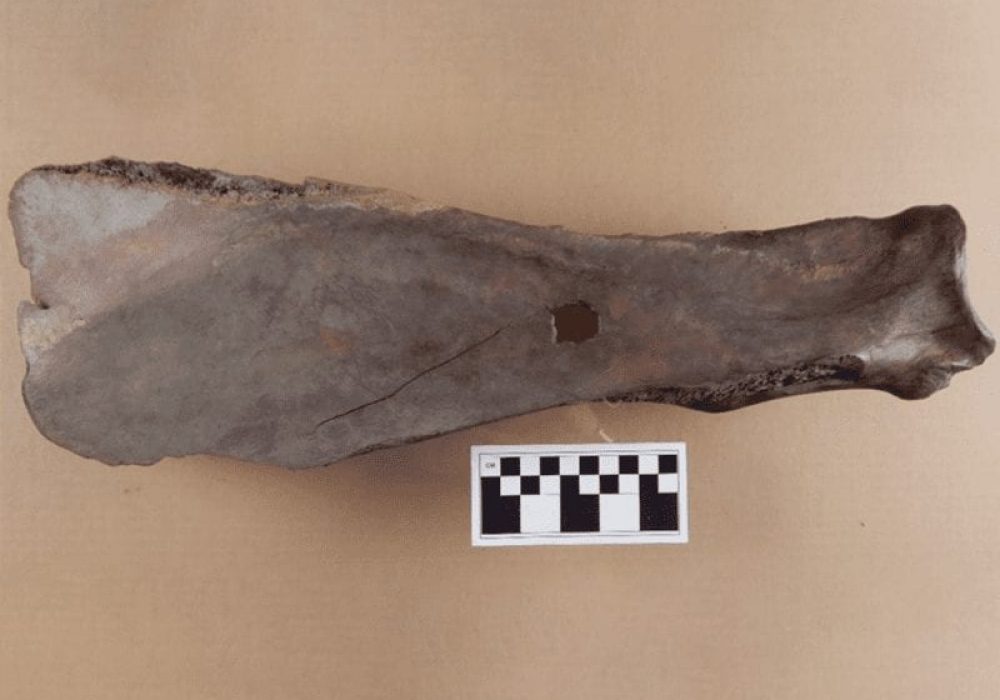 Indigenous farmers in what is now Manitoba, Canada, once used a pair of bison shoulder blades as gardening hoes, reports CBC News.

Eric Olson, a student at the University of Manitoba, spotted the unusual tools while walking along a creek around ten miles south of the town of Melita in 2018. A 2014 flood likely brought the bones to the surface.

The bison scapula “were actually mounted on shafts, long wooden handles, and were used to garden essentially, to grow probably plots of corn, maize and other foods like squash and beans were probably also cultivated,” says Mary Malainey, an anthropologist at Brandon University who is now leading excavations at the site, to Charles Lefebvre of CTV News.

Malainey tells Michele LeTourneau of the Brandon Sun that finding complete hoes made from bison scapula is “really unusual.” She adds that the artifacts are “not just possible hoe fragments, in air quotes, but definite. No doubt about it.”

For now, the archaeologist notes, “It’s too soon to say which Indigenous population made and used the hoes.”

Though Indigenous groups likely occupied the Melita site for around 200 years, between the late 1400s and the 1600s or 1700s, Malainey points out that displacement and migration sparked by the fur trade makes it difficult to determine which community lived in a specific area at a given time.

“Could they be Siouxan? Yes,” she tells the Brandon Sun. “Could they be something else, like Algonquian? Yes. But we don’t know.”

The discovery represents just the second piece of evidence suggesting the area’s Indigenous population practiced gardening or farming prior to the arrival of the first European colonists in the 17th century. The other site is located in Lockport, north of Winnipeg.

According to CBC News, the Lockport tools are similar in appearance but were found in a more muddled archaeological context, making them less informative than the newly cataloged find. Comparatively, the site near Melita is within a wildlife management area, ensuring the bison-bone hoes remained virtually undisturbed.

“Archaeologists rely on the context of the find, not just the individual artifacts, but where they are in relation to everything else in order to create the interpretation, to tell the story of the lives of the people who formerly occupied the site,” says Malainey to CBC News.

Hundreds of years ago, most Indigenous people living in western Canada were hunter-gatherers who moved from place to place to take advantage of seasonal resources. But evidence of agriculture at the Melita site points toward a more permanent settlement, making it “very different than a lot of the other sites that we have dating to the late pre-contact period in Manitoba,” as Malainey tells CTV News.

Moving forward, the archaeologists plan on using ground-penetrating radar to search for signs of the society that made and used the bone hoes, report Betty Sawatzky and Barry Lamb for Discover Westman. The researchers will also collect soil cores that could capture traces of crops and other plants grown at the site, per CBC News.