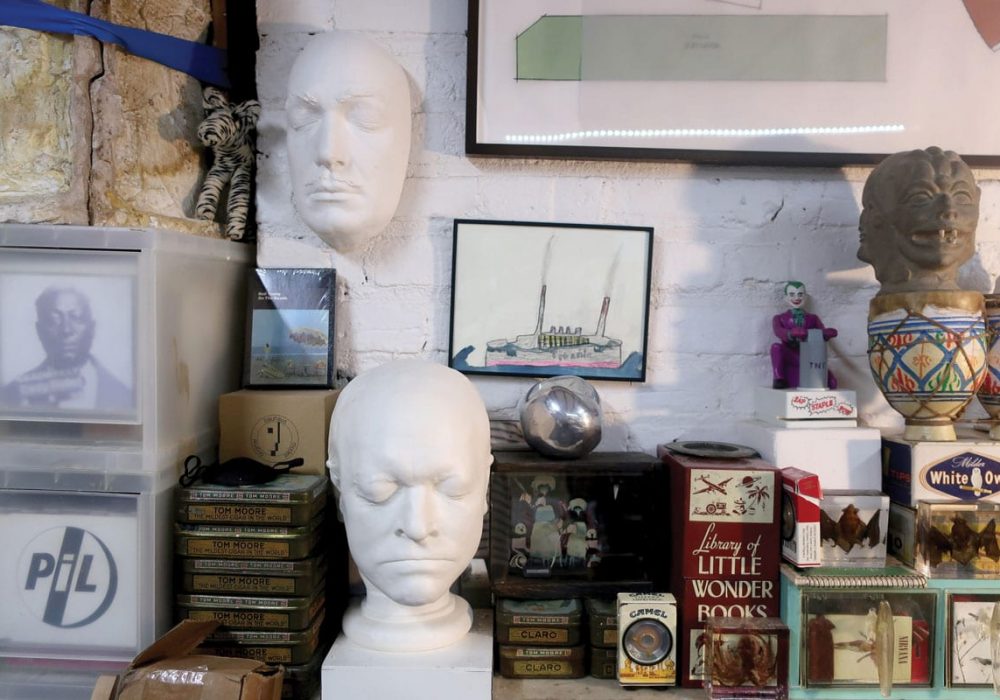 The room in which Marcel Dzama secluded himself to work this past spring does not lack for whimsicality. Shelves stocked with art books serve double duty as a home for Gumby figurines and tins of smoked sausages labeled with hokey drawings of a boy from what looks like the 1950s-era heyday of canned meats. A kitschy Marcel Duchamp necktie alludes to Tu m’ (the artist’s last painting on canvas, itself an impish nest of allusions), and then there are two portrait busts acquired from eBay, one of the hot-blooded Romantic poet William Blake and the other of horror-movie maven Vincent Price.

In line with horror, the studio abounds in darkness too. A sign bearing a skull and crossbones warns of “danger” that had coursed through wires inside a Mexican electrical box, and Guadalajaran devil masks peer down on a Stormtracker emergency radio (with a hand crank for recharging when the power goes out) and a copy of Bela Lugosi’s 1931 Dracula on a spool of Super 8 film.

In the midst of all that—on what Dzama calls “a big Eames desk, not an original, just a rip-off”—is the workstation of an artist whose drawings and paintings owe to a sensibility informed by an enigmatic mix of influences: the fantasy and frivolity in children’s stories, the absurdity and nihilism of Dada, the countless ways that folk culture of all kinds can be both free-spirited and impossibly macabre.

Dzama has a bigger studio in a building nearby but during the coronavirus shutdown he took to sequestering at his home in Brooklyn, with his wife and 8-year-old son—and an artistic practice that is more adaptable than most to small spaces. “It’s a great distraction,” he said of drawing in a time of quarantine, during which he granted a studio visit via a FaceTime call meted out on various screens. “It reminds me of when I lived in Winnipeg in the winter months. It was so cold—like minus-40 degrees—that you wouldn’t want to go out to do anything. I would stay in my parents’ basement and draw for an entire month.”

Dzama’s work while in confinement began with evolutions of sketches he made during a trip to Mexico, just a few weeks before his world locked down. “I was a bit depressed,” he said, “so I took up these drawings that I started when I was traveling, mainly sketches of palm trees and pools.” To the pleasant renderings of his son swimming he added characters of mysterious kinds that he tends to revisit and revise in different forms. One work titled The pool near the ocean features four women in polka-dot beachwear walking up from behind—“like four horsemen of doom approaching,” the artist said. Another is accentuated by “a four-eyed lion, kind of a Lucifer-type character” rendered in watercolors that retain their look from early stages when they were still fluid and alive.

When it comes time to paint, Dzama is partial to the watercolors that Dr. Ph. Martin’s has been making since 1934. But one tool of his trade is a bit more idiosyncratic: a type of root-beer concentrate that makes a “nice brown” when not used for its intended purpose. “In art school I used to use everything like that, stuff like wine and ketchup,” Dzama said. “But wine fades, and some things would rot or bugs would get on them.” (The concentrate he likes, made by Rainbow Flavors in Missouri, has garnered mixed reviews on Amazon. “They make an excellent slush!” reads one. Another: “Doesn’t taste that great but maybe that’s on me.”)

In addition to visions arising from his trip to Mexico, Dzama was at work on a body of drawings related to a commission from the New York Metropolitan Transit Authority’s Arts & Design program for art in and around the city’s subways. Though constrained in terms of what he could say about a project whose future in the coming months might change, he talked about it in the context of a stage work he collaborated on (designs for costumes and sets) with choreographer Justin Peck and composer Bryce Dessner for the New York City Ballet. Premiering in 2016, The Most Incredible Thing served as an update to a dark fairy tale by Hans Christian Andersen written more than 140 years ago. Since then, the project has maintained a hold on Dzama’s imagination.

“These are opera or ballet scenes, always with a moon or sun or stars,” he said of drawings that were in the works in April. “I’ve been kind of going in that direction with my art: heavy on the ballet and alchemy and solar systems.” While working with Peck, Dzama conceived a possible follow-up project inspired in part by a costume he made in mind of Loie Fuller, an important early figure in the history of modern dance known to stage spectacles with flowing fabrics and elaborate lighting designs in the late 19th and early 20th centuries. “I was considering writing a children’s story about these kids who come into a garden and get changed into moths by a wizard. It had something to do with the moon as well,” Dzama said. “We never ended up doing it, but it all ended up in these drawings.”

Asked if there is always an aspect of storytelling in his work, Dzama said, “A lot of times there is. But then, when things that have nothing to do with the original idea start to [appear] on the paper, I’ll go with that as well.” He equated the act of following his whims to making short films with his friend and collaborator Amy Sedaris. “I would write out scenarios and then just leave it blank for her to improvise,” he said in reference to the comic actress whose quirks and eccentricities are legion. “With the drawings, I’m drawing but also letting the drawing do improvisation.”

For a work he was in the middle of titled Blue Moon, Dzama inventoried a series of decisions as best as he could remember them. “I would have done a circle here knowing that it would fill the space,” he said, pointing to a heavenly body with a face modeled in part on the star of the Georges Méliès 1902 cinema classic A Trip to the Moon. “And then I definitely would have started with this girl”—an evocation in certain ways of Emma González, the gun-control advocate who gained public recognition when her high school in Parkland, Florida, suffered a massacre in 2018.

Though Dzama has drawn González in other of his works in the past, her presence isn’t exactly obvious—or even remotely evident—in the context of a wild phantasmagoria like something from an opium dream or a Busby Berkeley film. “Someone would have to do a little detective work, I guess,” he said of the prospect of a viewer picking up the cue. Otherwise, the private references keep unreeling. “I was trying to put in some elements of the Gowanus Canal,” he said, “so I have these fish and a bit of water in it—oil stains on the water because it used to be very industrial over there.”

Blue Moon would go on to be colored with paint after the lines were all established, in a process that for large works can require about a week, give or take. “But then there are others that take less time, much more intimate and quick, with a nice payoff right away—when you get the satisfaction of finishing a work at the end of the day,” Dzama said. “Both have been nice to have during quarantine.”

In recent months, with his schedule shuffled around in lockdown, Dzama started working more in the mornings. But he still does best at night. “It’s easier to work when everyone’s in bed,” he said. “For some reason I always shift to late hours, maybe because I’ve done it since my teens.”

He blushed a bit while confessing that a preference for late-night solitude is “kind of a teen routine.” But “there’s something magical about it for drawing,” he said. “It gets one foot in the dream world.”

A version of this article appears in the Summer 2020 issue of ARTnews, under the title “Marcel Dzama Makes a Drawing.”