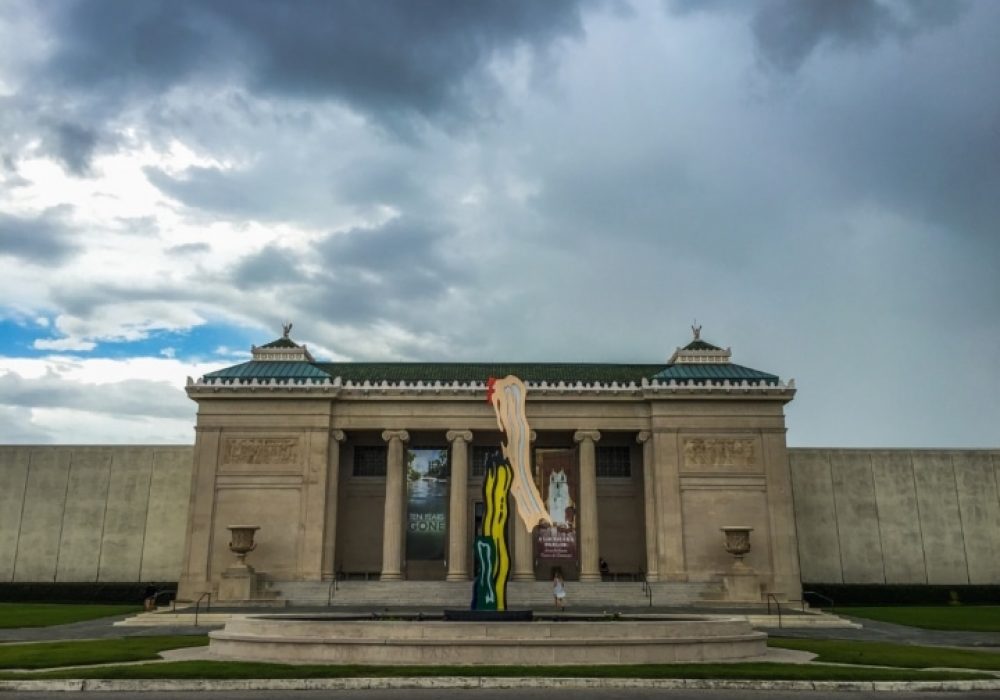 In June, a group of former staff members at the New Orleans Museum of Art (NOMA) accused the institution of enabling a “plantation-like culture” in an open letter that described instances of surveillance and discrimination of Black and LGBTQ workers at the museum. Backed by hundreds of supporters, they launched the initiative #DismantleNOMA which calls on the museum to fundamentally reform its work environment and to immediately separate itself from its current leadership.

These demands are amplified in a new open letter released today, October 12, by a wide group of artists, art workers, and organizers from across the country. The letter, signed by more than 150 supporters to date, calls on NOMA to “take the first step toward restoring its relationship with the New Orleans community it claims to serve by immediately implementing the thirteen changes put forth by #DismantleNOMA.”

Symbolically released on Indigenous Peoples Day, federally recognized as Columbus Day, the open letter follows the opening of a new exhibition at NOMA this past weekend. When asked about the timing of the letter, its authors told Hyperallergic: “In the United States EVERYDAY holds the potential for resistance. Our interest in Indigenous Peoples Day extends only so far as its meaning encourages colonial institutions like NOMA to reflect on the persistent and ongoing nature of their settler violence.”

“Every day since this country’s inception we have seen violence enacted on Indigenous and Black people,” they continued. “We could have released this letter today, tomorrow or any day of the month. We stand firmly against white supremacy every day of the year.”

#DismantleNOMA has accused the museum administration of ignoring and perpetuating the use of racial slurs, wage discrimination against Black workers, violence by staff against Black visitors, and surveillance of targeted workers. The authors of the initial letter in June — Jennifer Williams; Dr. fari nzinga; Ifátùmínínú Bamgbàlà Arẹ̀sà (formerly known as Kelsi Brooks); Jonathan Serrette; and Jane Kate Wood — also decried the museum’s decision to permanently install a recreation of a plantation parlor at a museum that serves a majority-Black population.

“How can NOMA claim to provide a public service when it harms the communities it purports to serve?” today’s open letter asks. The group calls on artists, curators, and arts workers “to place strict conditions on their collaboration with NOMA — to starve it of creative labor, time, energy, membership, admissions fees, etc., until all of #DismantleNOMA’s demands are met in full.”

The letter also encourages current curatorial staff, and funders like the Andrew W. Mellon Foundation and the Ford Foundation, to publicly call on the museum for reform.

In a statement to Hyperallergic, NOMA said that it is “committed to being an anti-racist institution” and that it has outlined steps to honor that commitment in a “comprehensive Agenda for Change.”

“The Agenda for Change, readily accessible on our website and regularly updated with our progress, affirms our anti-racist commitments and details the work NOMA is doing in the areas of accountability, staff and equity, board development, programs and community, as well as collections, acquisitions and exhibitions,” the museum said. “All of these efforts reflect our dedication to serve our visitors, expand the offerings NOMA provides to the community in response to their requests and needs, and create a more welcoming and inclusive environment for our visitors, staff and artists.”

Guerrilla Girls, Ebony G. Patterson, William Powhida, Chloë Bass, Michael Rakowitz, and Xaviera Simmons are among the dozens of artists signed on today’s statement. The group continues to collect signatures to the open letter, which is reproduced in full below:

We are a group of artists and arts workers from across the United States, some of whom have exhibited or otherwise worked with the New Orleans Museum of Art (NOMA). We have penned this letter to express our resounding support for the demands put forth by former NOMA employees Jennifer Williams, Dr. fari nzinga, Ifátùmínínú Bamgbàlà Arẹ̀sà (formerly known as Kelsi Brooks), Jonathan Serrette, and Jane Kate Wood, and for the broader initiative to #DismantleNOMA. We implore the museum to take the first step toward restoring its relationship with the New Orleans community it claims to serve by immediately implementing the thirteen changes put forth by #DismantleNOMA.

We do not expect to shame the museum into restructuring itself, since this is an institution that has long been shameless in its mistreatment of marginalized people. Instead, we ask artists, curators, and arts workers, whose labor sustains this institution, to place strict conditions on their collaboration with NOMA—to starve it of creative labor, time, energy, membership, admissions fees, etc., until all of #DismantleNOMA’s demands are met in full. We ask current curatorial staff at the museum to stand publicly in solidarity with #DismantleNOMA. We urge progressive funders, including the Andrew W. Mellon Foundation and the Ford Foundation, to act in accord with their commitments to racial justice by honoring the demands of these former employees and community members.

We are dismayed, but not particularly surprised, by the virulently anti-Black, sexist, homophobic, and transphobic violence against NOMA employees enabled—and in some cases enacted—by current director Susan M. Taylor. The immediate removal of Susan M. Taylor is among #DismantleNOMA’s most urgent demands. The institution’s malfeasance also includes discriminatory hiring practices. Whereas museum leadership and management are overwhelmingly white, Black employees predominantly occupy lower and mid-level positions, contributing to a racialized wage gap within the museum and reinforcing economic disparities that exist across the city and region. The testimonies compiled by #DismantleNOMA further detail how anti-Blackness radiates out from the institution, impacting not only employees but the public as well. Black visitors have reportedly been subject to hostility by museum staff. In a city with a majority-Black population, how can NOMA claim to provide a public service when it harms the communities it purports to serve?

The museum’s response to #DismantleNOMA has been deeply disappointing. NOMA has created a page, titled “Agenda for Change,” hidden under the “About” tab on its website, while the board of directors has largely remained silent as numerous former employees, interns, and community members speak out. NOMA continues to employ those identified by #DismantleNOMA as perpetuating the institution’s racism, and remains an unsafe workplace for employees in almost every department. We echo #DismantleNOMA’s call for an independent, third-party investigation into all harassment claims submitted during Susan M. Taylor’s directorship.

The discriminatory violence endured by NOMA employees and visitors is a symptom of the racism of cultural institutions—insofar as they spearhead imperial knowledge production, facilitate gentrification and displacement, and, as Rhonda Lieberman wrote last year, enable “the worst of the moneyed elite … to launder their reputations for plunder and pelf.” NOMA is a particularly egregious example: founded by Isaac Delgado, whose wealth derives from a sugar plantation, the museum is now sustained by oil money and other harmful private funders. For instance, the Helis Foundation, which currently funds museum events and subsidizes free admission for teenagers, represents the philanthropic arm of the Helis Oil & Gas Energy Project. How much more of NOMA’s funding derives from slavery, exploitation, and extractive industries?

We are galvanized by the many art worker organizing efforts currently underway, as well as by the ongoing movement to protect and uplift Black lives in response to over four hundred years of state-sanctioned anti-Black violence in the US. We understand the demands of  #DismantleNOMA as part of a broader struggle against the ways in which arts institutions maintain white supremacy and racial capitalism. Artist Xaviera Simmons writes, “Whiteness must undo itself to make way for the truly radical turn in contemporary culture”; #DismantleNOMA provides an occasion for such an undoing to begin.